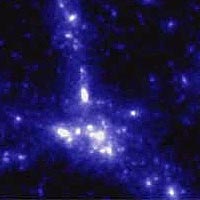 Computer simulation of the initial Hubble expansion and subsequent formation of a galaxy-size halo of dark matter over the last 13.5 billion years — 99 percent of the lifetime of the universe. The simulation shows an intricate pattern of swarming dark matter clumps, some of which may not host luminous matter such as stars and gas. Play animation (Credit: Chung-Pei Ma, Ed Bertschinger)

The "dark matter" that comprises a still-undetected one-quarter of the universe is not a uniform cosmic fog, says a University of California, Berkeley, astrophysicist, but instead forms dense clumps that move about like dust motes dancing in a shaft of light.

In a paper submitted this week to Physical Review D, Chung-Pei Ma, an associate professor of astronomy at UC Berkeley, and Edmund Bertschinger of the Massachusetts Institute of Technology (MIT), prove that the motion of dark matter clumps can be modeled in a way similar to the Brownian motion of air-borne dust or pollen.

Their findings should provide astrophysicists with a new way to calculate the evolution of this ghost universe of dark matter and reconcile it with the observable universe, Ma said.

Dark matter has been a nagging problem for astronomy for more than 30 years. Stars within galaxies and galaxies within clusters move in a way that indicates there is more matter there than we can see. This unseen matter seems to be in a spherical halo that extends probably 10 times farther than the visible stellar halo around galaxies. Early proposals that the invisible matter is comprised of burnt-out stars or heavy neutrinos have not panned out, and the current favorite candidates are exotic particles variously called neutrilinos, axions or other hypothetical supersymmetric particles. Because these exotic particles interact with ordinary matter through gravity only, not via electromagnetic waves, they emit no light.

"We're only seeing half of all particles," Ma said. "They're too heavy to produce now in accelerators, so half of the world we don't know about."

The picture only got worse four years ago when "dark energy" was found to be even more prevalent than dark matter. The cosmic account now pegs dark energy at about 69 percent of the universe, exotic dark matter at 27 percent, mundane dark matter - dim, unseen stars - at 3 percent, and what we actually see at a mere 1 percent.

Based on computer models of how dark matter would move under the force of gravity, Ma said that dark matter is not a uniform mist enveloping clusters of galaxies. Instead, dark matter forms smaller clumps that look superficially like the galaxies and globular clusters we see in our luminous universe. The dark matter has a dynamic life independent of luminous matter, she said.

"The cosmic microwave background shows the early effects of dark matter clumping, and these clumps grow under gravitational attraction," she said. "But each of these clumps, the halo around galaxy clusters, was thought to be smooth. People were intrigued to find that high-resolution simulations show they are not smooth, but instead have intricate substructures. The dark world has a dynamic life of its own."

Ma, Bertschinger and UC Berkeley graduate student Michael Boylan-Kolchin performed some of these simulations themselves. Several other groups over the past two years have also showed similar clumping.

In addition, astrophysicists modeling the motion of dark matter were puzzled to see that each clump had a density that peaked in the center and fell off toward the edges in the exact same way, independent of its size. This universal density profile, however, appears to be in conflict with observations of some dwarf galaxies made by Ma's colleague, UC Berkeley professor of astronomy Leo Blitz, and his research group, among others.

Ma hopes that a new way of looking at the motion of dark matter will resolve these problems and square theory with observation. In her Physical Review article, discussed at a meeting earlier this year of the American Physical Society, she proved that the motion of dark matter can be modeled much like the Brownian motion that botanist Robert Brown described in 1828 and Albert Einstein explained in a seminal 1905 paper that helped garner him the 1921 Nobel Prize in Physics.

Brownian motion was first described as the zigzag path traveled by a grain of pollen floating in water, pushed about by water molecules colliding with it. The phenomenon refers equally to the motion of dust in air and dense clumps of dark matter in the dark matter universe, said Ma.

This insight "let's us use a different language, a different point of view than the standard view," to investigate the movement and evolution of dark matter, she said.

Other astronomers, such as UC Berkeley emeritus professor of astronomy Ivan King, have used the theory of Brownian motion to model the movement of hundreds of thousands of stars within star clusters, but this, Ma said, "is the first time it has been applied rigorously to large cosmological scales. The idea is that we don't care exactly where the clumps are, but rather, how clumps behave statistically in the system, how they scatter gravitationally."

Ma noted that the Brownian motion of clumps is governed by an equation, the Fokker-Planck equation, that is used to model many stochastic or random processes, including the stock market. Ma and collaborators are currently working on solving this equation for cosmological dark matter.

The work was supported by the National Aeronautics and Space Administration.