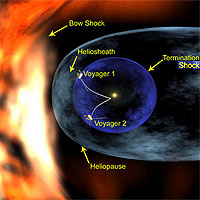 Click here to view more images and movie animations related to this story.

NASA's Voyager 1 spacecraft is about to make history again as the first spacecraft to enter the solar system's final frontier, a vast expanse where wind from the Sun blows hot against thin gas between the stars: interstellar space. However, before it reaches this region, Voyager 1 must pass through the termination shock, a violent zone that is the source of beams of high-energy particles.

Voyager's journey through this turbulent zone will give scientists their first direct measurements of our solar system's unexplored final frontier, called the heliosheath, and scientists are debating if this passage has already begun. Two papers about this research are being published in Nature on November 5, 2003. The first paper, by Dr. Stamatios M. Krimigis of the Johns Hopkins University Applied Physics Laboratory, Laurel, Md., and his team, gives evidence supporting the claim that Voyager 1 passed beyond the termination shock. The second paper, by Dr. Frank B. McDonald of the University of Maryland, College Park, and his team, gives evidence against this claim. A third paper, published October 30, 2003 in Geophysical Research Letters by Dr. Leonard F. Burlaga of NASA's Goddard Space Flight Center, Greenbelt, Md., and collaborators, gives evidence that Voyager 1 did not pass beyond the termination shock.

"The Voyager 1 observations show we have entered into a new part of the solar system. Regardless of whether we crossed the termination shock or not, the teams are excited because this has never been seen before - the observations are different here than in the inner solar system," said Dr. Eric Christian, Discipline Scientist for the Sun Earth Connection research program at NASA Headquarters, Washington, DC.

"Voyager 1 has seen striking signs of the region deep in space where a giant shock wave forms as the wind from the Sun abruptly slows and presses outward against the interstellar wind. The observations surprised and puzzled us, so there is much to be discovered as Voyager begins exploring this new region at the outer edge of the solar system," said Dr. Edward Stone, Voyager Project Scientist, California Institute of Technology, Pasadena, Calif.

At more than eight billion miles (13 billion km) from the Sun, Voyager 1 is the most distant object built by humanity. Launched on September 5, 1977, it explored the giant planets Jupiter and Saturn before being tossed out toward deep space by Saturn's gravity. It now approaches, and may have temporarily entered, the region beyond termination shock.

Estimating the location of the termination shock is hard because we don't know the precise conditions in interstellar space, and even what we do know, the speed and pressure of the solar wind, changes which causes the termination shock to expand, contract, and ripple. You can see a similar effect every time you wash dishes. If you place a plate underneath a stream of water, you notice the water spreads out over the plate in a relatively smooth flow. The water flow has a rough edge where the water slows down abruptly and piles up. The edge is like the termination shock, and as the water flow changes, the shape and size of the rough edge change.

From about August 1, 2002 to February 5, 2003, scientists noticed unusual readings from the two energetic particle instruments on Voyager 1, indicating it had entered a region of the solar system unlike any encountered before. This led some to claim that Voyager may have entered a transitory feature of the termination shock. Just as small bumps and "fingers" appear and disappear in the rough edge of the water flow over a plate, Voyager might have entered a temporary "finger" in the edge of the termination shock.

The controversy would be resolved easily if Voyager could still measure the speed of the solar wind, because the solar wind slows abruptly at the termination shock. However, the instrument that measures solar wind speed no longer functions on the venerable spacecraft, so scientists must use data from the instruments that are still working to infer if Voyager pierced the termination shock.

Evidence for crossing the shock includes Voyager's observation that high-velocity electrically-charged particles (electrons and ions) increased more than 100 times during the August 1, 2002 to February 5, 2003 period. This would be expected if Voyager passed the termination shock, because the shock naturally accelerates electrically charged particles that bounce back and forth like ping pong balls between the fast and slow winds on the opposite sides of the shock.

Secondly, the particles were flowing outward, past Voyager and away from the Sun. This would be expected if Voyager already crossed beyond the termination shock, because the acceleration region in the termination shock would now be behind the spacecraft. Third, an indirect measure of the solar wind speed indicated the solar wind was slow during this period, as would be expected if Voyager was beyond the shock.

"We have used an indirect technique to show that the solar wind slowed down from about 700,000 mph to much less than 100,000 mph. This same technique was used by us before, when the instrument measuring the solar wind speed was still working, and the agreement between the two measurements was better than 20% in most cases," said Krimigis.

Evidence against entry into the shock includes the observation that while there was a dramatic increase in low-speed particles, they weren't seen at the somewhat higher speeds scientists believe the termination shock generates.

However, the strongest evidence against entry is Voyager's observation that the magnetic field did not increase during this period. According to theoretical models, this must happen whenever the solar wind slows down. Imagine a highway with moderate traffic. If something makes the drivers slow down, say a puddle of water, the cars pile up - their density increases. In the same way, the density (intensity) of the magnetic field carried by the solar wind will increase if the solar wind slows down.

"The analysis of the Voyager 1 magnetic field observations in late 2002 indicate that it did not enter a new region of the distant heliosphere by having crossed the termination shock. Rather, the magnetic field data had the characteristics to be expected based upon many years of previous observations, although the intensity of energetic particles observed is unusually high," said Burlaga.

The teams agree that Voyager 1 has seen a new phenomenon: a six-month period when low-energy particles were very abundant and flowing away from the Sun. When the unusual period ended, both agree that Voyager 1 was back in the solar wind, so if this was a temporary passage beyond the termination shock, the shock will be seen again, probably in the next couple years. Finally, the observations indicate that the termination shock is a lot more complicated than anyone thought.

For their original missions to Jupiter and Saturn, Voyager 1 and sister spacecraft Voyager 2 were destined to regions of space where solar panels would not be feasible, so each was equipped with three radioisotope thermoelectric generators to produce electrical power for the spacecraft systems and instruments. Still operating in remote, cold and dark conditions 26 years later, the Voyagers owe their longevity to these Department of Energy-provided generators, which produce electricity from the heat generated by the natural decay of plutonium dioxide.