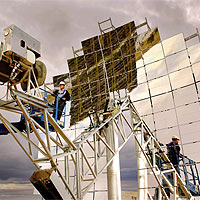 Five new systems will be installed between now and January at Sandia’s National Solar Thermal Test Facility. They will join a prototype dish-Stirling system that was erected earlier this year, making a six-dish mini power plant producing up to 150kW of grid-ready electrical power during the day.

“This will be the largest array of solar dish-Stirling systems in the world,” says Chuck Andraka, the Sandia project leader. “Ultimately SES envisions 20,000 systems to be placed in one or more solar dish farms and providing electricity to southwest U.S. utility companies.”

Sandia and SES staff will work together over the next couple of months to assemble the five new state-of-the-art systems.

Each dish unit, which consists of 82 smaller mirrors formed in the shape of a dish, will be similar to the system installed earlier this year with some modifications to improve the design. The frame is steel made by Schuff Steel, also of Phoenix, while the mirrors, provided by Paneltec of Lafayette, Colo., are laminated onto a honeycomb aluminum structure invented and patented in the late 1990s by Sandia researcher Rich Diver (6218). The engine will be assembled at Sandia’s test facility using parts that were contracted out by SES.

Once the units are installed, Sandia and SES researchers will experiment with the systems to determine how best they can be integrated in a field, as well as improving reliability and performance.

“It’s one thing to have one system that we can operate, but it’s a whole other thing to have six that must work in unison,” Andraka says.

Each unit operates automatically. Without operator intervention or even on-site presence, it starts up each morning at dawn and operates throughout the day, tracking the sun and responding to clouds and wind as needed. Finally it shuts itself down at sunset. The system can be monitored and controlled over the Internet. Researchers want to make the six systems work together with the same level of automation. The controls and software that perform this integration will be scalable to much larger facilities.

The solar dish generates electricity by focusing the sun’s rays onto a receiver, which transmits the heat energy to an engine. The engine is a sealed system filled with hydrogen, and as the gas heats and cools, its pressure rises and falls. The change in pressure drives the pistons inside the engine, producing mechanical power. The mechanical power in turn drives a generator and makes electricity.

The cost for each prototype unit is about $150,000. Once in production SES estimates that the cost could be reduced to less than $50,000 each, which would make the cost of electricity competitive with conventional fuel technologies.

Bob Liden, SES executive vice president and general manager, says solar electric generation dish arrays are an option for power in parts of the country that are sunny like New Mexico, Arizona, California, and Nevada. They could be linked together to provide utility-scale power. A solar dish farm covering 11 square miles hypothetically could produce as much electricity per year as Hoover Dam, and a farm 100 miles by 100 miles in the southwestern U.S. could provide as much electricity as is needed to power the entire country.

“Another application could be to operate as stand-alone units in remote areas off the grid, such as the Navajo reservation, and supply power to one or several homes,” Liden says. Stand-alone units have already been demonstrated as an effective means of pumping water in rural areas.

He notes the dish-Stirling system works at higher efficiencies than any other current solar technologies, with a net solar-to-electric conversion efficiency reaching 30 percent. Each unit can produce up to 25 kilowatts of daytime power.

“This is the perfect type of electricity generation for the Southwest,” Liden says. “It’s a renewable resource, it’s pollution free, and the maintenance of a solar farm is minimal.”

One of the system’s advantages is that it is “somewhat modular,” and the size of the facility can be ramped up over a period of time, Andraka says. That is compared to a traditional power plant or other large-scale solar technologies that have to be completely built before they are operational.

The cooperation between SES and Sandia is seen as critical to the success of this technology. This on-site teaming is a new way of doing business in the energy field and is being watched with interest at DOE headquarters, Andraka says. “There is no more effective way of providing technology transfer,” he says.