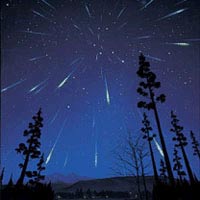 Observers of the night skies should take delight. Arriving fresh on the heels of the recent total lunar eclipse is the annual Leonid meteor shower. Make plans to watch the show on the night of Tuesday, November 18.

To catch the outbreak of meteors, one every two to three minutes, interested viewers should do their best to seek out clear dark skies away from any interfering city lights. Essential equipment for watching meteors includes good company and a lawn chair or blanket to stretch out on to enjoy the view.

The Leonid meteor shower gets its name because the meteors appear to radiate from the constellation of Leo, the lion. Leo rises in the east around 1:00 a.m. This year the predicted maximum number of meteors is expected to occur at 11:28 p.m. PST. For observers on the West Coast, Leo will still be below the horizon. Meteors will be visible, but be sure to look eastward to catch the shower. As the night wears on, Leo will rise, bringing meteors to more parts of the sky.

To understand what meteors are, it is useful to know a little bit about comets. Astronomers often describe comets as being dirty snowballs. These aren't your average snowballs. Comets orbit the sun and are miles across. As the orbit of a comet brings it into the inner solar system, the sun's heat warms the comet's surface, releasing gas and dust. It is this gas and dust that forms the comet's tail. After several trips around the sun, the orbit of a comet begins to fill up with the comet's dusty debris. Whenever Earth passes through such a swarm of dust, a meteor shower is produced.

It is a comet known as Tempel-Tuttle that produces the dust that causes the Leonid meteor shower. Each dust grain that we encounter hits our atmosphere with enough energy to cause the familiar bright streak that many people refer to as a "shooting" or "falling" star.