Uncovering mysteries beneath the Earth's surface 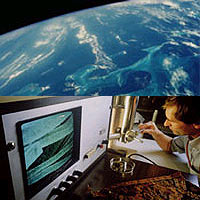 Back in the old days, when doctors looked for tumors, exploratory surgery was the only option. Today they use CAT scans, x-rays, ultrasound, and other non-intrusive methods for checking out what lies beneath the skin’s surface. But how do we determine what is beneath the Earth’s surface? Invasive surgery on the Earth is just as dated as doctors’ old methods of finding tumors, if you ask Eric Miller, associate professor of electrical and computer engineering at Northeastern University. If we humans can rely on CAT scans to form three-dimensional computer models of our insides, surely "CAT scans for the Earth" can be valuable in finding contaminants such as nuclear waste, to replace drilling and other harmful methods. Miller and his team, with funding from the Department of Energy, are busily toiling away on this very kind of environmental remediation and monitoring.

For much of the last half of the last century, waste was disposed of in less-than-careful ways. This waste was generated from the buildup of the country's nuclear stockpile. In many locations, there’s a question about just what is in the earth and how it’s moving – a question that can be answered by digging up large tracks of land. But Miller says that not only is digging not economically feasible, it can also be dangerous if contaminants are exposed and not treated properly.

"One of the legacies of the Cold War is the proliferation of buried chemical and radioactive waste on the grounds of many Department of Energy labs," says Miller. "While people know roughly where material is buried, it is often the case that detailed records are not available. Working with the DOE National Lab in Idaho, we have been exploring processing methods designed to develop a ‘map’ of the subsurface which is required before excavation can begin."

With medical imaging, doctors are free to place the patient in a machine that collects data from all around him or her, but with the Earth, experts are constrained in terms of where data can be collect data from: the surface and boreholes. This means that the data makes high quality image formation much more difficult. Miller and his team are developing new methods to improve the resolution of the resulting images. The work is conducted in close collaboration with geophysicists and hydrologists from the Department of Energy, who can use Miller’s information to analyze the "fate and transport" of the contaminants flowing through the earth.