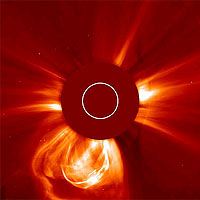 Outburst of gas from near the Sun’s south pole. The bright loop is cool, strongly magnetized material being swept away from the Sun. The white ring inside the central mask shows the size of the visible Sun.

While scientists and aurora spotters marvel at the explosions on the Sun, everyone responsible for the hundreds of satellites that serve human needs, from weather observations to car navigation, wishes that these potentially damaging events were more predictable.

So do the astronauts aboard the International Space Station, who recently had to shelter from energetic particles flung out by the most powerful solar flare ever recorded. Now, from space observations of the Sun going back more than 20 years, experts are beginning to make more sense of the solar outbursts. Apparently random events turn out to be signs of the Sun’s diligent housekeeping. It keeps sweeping away, out into space, untidy magnetic fields created by sunspots and other contortions in its atmosphere. The climax comes in a busy period of spring cleaning after the count of sunspots has peaked, every 11 years. It leaves the Sun with its main magnetic field completely overturned, and its north and south magnetic poles swapped around.

Great blasts of gas coming from the Sun, called coronal mass ejections, sometimes cause magnetic mayhem in the Earth’s vicinity. A report published this month takes stock of 7 years of observations of such events by the ESA/NASA SOHO spacecraft. It also compares them with the mass ejections recorded in 1979-85 by an American satellite, P78-1. Helping the scientists to decipher the events seen by the spaceborne telescopes are data from ground-based instruments at Kitt Peak, USA, and Nobeyama, Japan.

What emerges is a systematic pattern in the outbursts. It changes during the sunspot cycle, as the numbers of dark sunspots seen each day on the Sun’s bright surface first increases and then diminishes again. The mass ejections are often directly associated with the sunspots, which always lie in the Sun’s equatorial belt or at mid-latitudes.

Other mass ejections occur near the Sun’s poles, far away from any sunspots. These events are most frequent at the peak of sunspot activity, but they can continue for a while as the count of sunspots begins to decline. By getting rid of the magnetic remnants of previous activity, the high-latitude outbursts groom the polar magnetic fields in a new configuration.

‘The Sun is like a snake that sheds its skin,’ comments Nat Gopalswamy of NASA Goddard, lead author of the new report, which appears in the Astrophysical Journal. ‘In this case, it’s a magnetic skin. The process is long-drawn-out and it’s pretty violent. More than a thousand coronal mass ejections, each carrying billions of tonnes of gas from the polar regions, are needed to clear the old magnetism away. But when it’s all over the Sun’s magnetic stripes are running in the opposite direction.’

A chronicle from SOHO

This report is the latest in a series of studies of coronal mass ejections as seen by the LASCO instrument on SOHO, undertaken recently by Gopalswamy and his colleagues. When SOHO began its watch early in 1996, the Sun was quiet. There were very few sunspots and mass ejections happened less than once a day. But during the most intense solar activity, 1999-2000, there were more than five a day, on average – twice as many as scientists expected. What’s more, the average speed of the ejected clouds of gas doubled, from 275 to 550 kilometres per second.

When the sunspot count passed its peak in July 2000, mass ejections continued at a high rate. They did not reach their own peak in frequency until October 2002. Events followed a different timescale in the two polar regions of the Sun. A flurry of high-latitude mass ejections occurred near the north pole, completing the magnetic reversal there by November 2000. The south polar region lagged behind, and its new magnetic pole was not ‘clean’ until May 2002. In effect, the solar snake shed the magnetic skin first from its head and then from its tail.

Only a minority of the coronal mass ejections have significant effects on the space weather near the Earth. About a hundred times a year, when the Sun is at its stormiest, a blast of gas aims itself directly at our planet. Because it appears to surround the Sun, in the SOHO images, it is called a halo event. Its impact on the magnetic shield that protects the Earth causes a magnetic storm, which can for example produce extra current flowing in power lines and pipelines on the ground, with the risk of causing damage to these systems and, in extreme cases, equipment failure.

Also potentially harmful are high-speed mass ejections occurring near the western edge of the Sun around sunspot maximum. Although the gas does not come our way, energetic particles released in the outburst can do so, causing damage to spacecraft and endangering astronauts. Outbursts of this type are fortunately rare.

‘The analysis of what we’ve recorded since 1996 takes us a big step forward in making sense of space weather,’ says Bernhard Fleck, ESA’s project scientist for SOHO. ‘By clarifying when and why different kinds of coronal mass ejections occur, it gives us a better idea of what trouble-spots to watch, for possible solar outbursts, at different stages of the sunspot cycle.’

Still a major challenge For all space agencies, the Sun’s outbursts pose an increasing problem. As the equipment of spacecraft is miniaturized, it becomes more vulnerable to energetic particles and electromagnetic stresses of space weather. The planning of manned spaceflights has to take account of the hazards to astronauts. For a prolonged flight, such as now contemplated for a possible manned mission to Mars, the calendar of likely outbursts in relation to the sunspot cycle becomes a major consideration.

A workshop convened earlier this month at ESTEC, ESA’s science and technology centre at Noordwijk in the Netherlands, looked forward towards better monitoring and prediction services. ‘Embarrassing’ was the word used by Rainer Schwenn of Germany’s Max-Planck-Institut für Aeronomie, to describe the current state of space weather forecasting. He pointed out that a significant number of magnetic storms are still not predicted (‘missing alarms’) and a similar percentage of predicted events never occur (‘false alarms’).

The Space Environments and Effects Analysis Section in ESTEC acts as a focus for Europe-wide activities. This year it has fostered, as a pilot project, a network of nearly 30 European space weather services, 16 of which have received co-funding from ESA. The network will expand and more services will become operational over the next two years. Then it will be easier to assess the needs and benefits, and to consider what form a long-term European space weather programme might take.

‘Until now, much of our information about space weather gained from spacecraft comes from missions conceived for scientific purposes,’ notes Alexi Glover, who works on the pilot project at ESTEC. ‘But these scientific missions have limited life-spans, often with no policy for maintaining the flow of data after a mission has ended. Also, the delivery of data in near-real time is not always considered important for a scientific mission, whereas this would be crucial for any space weather monitoring mission. Meanwhile, European space weather services make the most of the valuable data coming from SOHO and other existing spacecraft.’

News Story Origin and Copyright: ESA
Click here for the original news release.
'We are all in the gutter, but some of us are looking at the stars.'