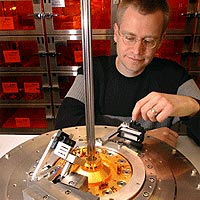 Sandia National Laboratories researcher Daniel Sinars demonstrates the setup he and his team created to peer into the center of Sandia’s Z machine at the moment of firing. The crystal under his finger is attached to portions of a Z target configuration. (Photo by Randy Montoya)

Peering into the center of Sandia National Laboratory’s Z machine as it fires had been a feat unachievable for a decade.

Other than a nuclear bomb, Z is the most powerful generator of X-rays on the planet. Last year, its central mechanism, called a Z-pinch, fused isotopes of hydrogen to create nuclear fusion.

Now, by inserting a pretty, two-inch-long crystal that reflects at only a single frequency into the hellish center of Z as it fires, researchers have been able to visually filter out the bedlam of more than 99 percent of the energies generated.

By shining the energy from a relatively weak laser beam through the machine and reflecting it off the crystal to a detector, the researchers have emerged with a series of pictures of the machine's key process — the dissolution of a wire cage (about the size of a spool of thread) into ionized gas particles.

By viewing the dissolution nanosecond by nanosecond, Z experimentalists can see more rapidly and accurately how to improve the final output.

These alterations will achieve still more powerful outputs for weapons studies and, eventually, controlled nuclear fusion that could produce unlimited energy from seawater.

The results will be the subject of an invited talk by Sinars at the upcoming American Physical Society's Division of Plasma Physics meeting in Savannah, Ga., Nov. 15-19.

The imaging process works because the crystal reflects only at a single wavelength. All other wavelengths, like unwanted suitors, are ignored. By bouncing the energy of a relatively weak laser beam of the same wavelength through the machine and off the crystal, researchers have emerged with a series of pictures resembling dental X-rays of the wire cage’s dissolution into ionized gas particles.

(The particles, contracted by a huge magnetic field, must be arranged to strike the central axis of the vanishing cage as simultaneously as possible to generate maximum X-rays; these already have been used to fuse pellets of deuterium.)

But how did Sinars’ team do it?

Expanding on work by Sergei Pikuz and Tanya Shelkovenko of the Lebedev Institute in Moscow and Cornell mentor David Hammer, who each had worked on far smaller machines, Sinars realized that while the Z machine released huge energies over tens of nanoseconds, it did so in a wide frequency band. He imagined shining X-rays generated by a relatively weak but single-frequency laser beam through the wire array as it crumbled. The image generated would be reflected by a crystal functioning in only that same frequency, spherically curved for better focus on a carefully placed external detector. Almost all of Z’s energies would be eliminated from the image because they would not be reflected by the crystal — as eerie a phenomenon as a vampire’s absent image in horror-movie mirrors — thus leaving the laser-generated image as unblotched as a dental X-ray. The laser’s energies — though only one-millionth as energetic as Z’s total output — would dominate in that one band, and from it, Sinars’ team would create images of the wire cage’s dissolution.

“Until our work, virtually every diagnostic on the Z facility simply measured the luminous self-emission from the z-pinch mass as it assembled on-axis and radiated,” says Sinars. “We now have been able to observe plasma stages at any point in the process, not just the final stage when the plasma is radiating x rays.”

Like finding a grain of sand in a sand pile

Says Sandia Pulsed Power Sciences Center director Jeff Quintenz, “That Dan can extract such detailed images from that maelstrom environment using such a small amount of energy is more than impressive. It’s like being able to find a grain of sand in a sand pile, or a single voice in a crowded coliseum.”

Says Cornell physics professor David Hammer, Chair of the American Physical Society’s Plasma Physics division, “Dan has extended backlighting work done elsewhere, but done so in the most extremely difficult environment. His implementation had to be novel to make it work. His work contributes major understanding of the critical dynamics of the Z-pinch.”

What the Sinars group saw

The images showed that wires at the center of the high-energy machine do not uniformly disintegrate, as was once thought. Current passing through the wires at first heats and melts them as expected, but only a portion of the metal becomes plasma. Because plasma is so much more conductive than the heated liquid metal “cores,” much of the electrical current is diverted from heating the wires and instead flows in the tenuous plasma surrounding the dense wire cores. The plasma — continually swept inward toward the center by the magnetic forces acting on the array — is replenished with material from the dense wire cores. The dense cores persist for relatively extended periods of time, eventually burn through, and only then are swept inward.

“The non-simultaneous arrival of the mass on the axis is believed to be the limiting factor on the peak radiation power achievable using wire-array z-pinches, so it is critical for us to understand exactly how the wire array mass assembles on the axis,” says Sinars. “This information is critical to improving our still-primitive understanding of why z-pinches work as well as they do.”