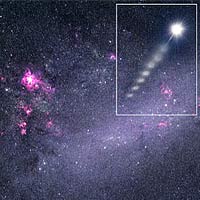 Observations with Kueyen, one of the 8.2m telescopes composing the ESO Very Large Telescope (VLT), have led to the discovery of a short-lived massive star that is moving at a very high speed through the outer halo of the Milky Way galaxy and into intergalactic space. This finding could provide evidence for a previously unknown massive black hole in the heart of the Milky Way's closest neighbour, the Large Magellanic Cloud.

The star, named HE 0437-5439, was discovered by the Hamburg/ESO sky survey, a project aimed at detecting quasars but which discovered many faint blue stars as well. Scientists at the Dr. Remeis-Sternwarte (University of Erlangen-Nürnberg, Germany) and the Centre for Astrophysics Research (University of Hertfordshire, UK) found what is likely to be a hot massive main-sequence star, far out in the halo.

This came as a great surprise. Massive stars have lifetimes of only some tens or hundreds of million years, short lived for astronomical standards, but the halo does not usually host stars as young as this. In fact, it contains the oldest stars in the Milky Way that are more than ten billion years old. Massive stars are usually found in or near star forming regions in the Galactic disc such as the famous Orion nebula: HE 0437-5439 is indeed similar to the trapezium stars that make the Orion nebula shine.

Data were obtained with the ESO VLT and its high resolution UVES spectrograph. This allowed the chemical composition to be measured which turned out to be similar to that of the Sun, confirming that HE0437-5439 is a young star. Its mass is eight times larger than that of the Sun and the star is only 30 million years old. It is almost 200,000 light years away from us in the direction of the Doradus Constellation ('the Swordfish').

Even more exciting was the fact that the data indicated the star to be receding at a velocity of 723 km/s, or 2.6 million kilometres per hour. HE0437-5439 moves so fast that the gravitational attraction of the Milky Way is too small to keep it bound to the Galaxy. Hence the hyper-velocity star will escape into intergalactic space.

As the star is moving so fast, it must have been born far away from its present position and accelerated to where we observe it today. What accelerated the star to such a high speed? Calculations carried out already in the late 1980s showed that a so-called massive black hole (SMBH), i.e. a black hole a million times as massive as the Sun, or larger, could provide the enormous acceleration. If a binary star approaches the SMBH, one star falls towards the SMBH while its companion is ejected. The Galactic Centre of the Milky Way hosts such a black hole of about 2.5 million solar masses, and this might have accelerated HE0437-5439.

But the necessary travel time was found to be more than three times the age of the star. Hence the star is too young to have travelled all the way from the Galactic centre to its present location. Either the star is older than it appears or it was born and accelerated elsewhere.

A different clue to the origin of HE0457-5439 comes from its position in the sky. HE0437-5439 is 16 degrees away from the Large Magellanic Cloud (LMC), one of the nearest neighbouring galaxies to the Milky Way. This galaxy lies at a distance of 156,000 light years. HE0457-5439 is even more distant than the LMC and is much closer to the LMC than to the galaxy. The astronomers showed that the star could have reached its present position within its lifetime if it were ejected from the centre of the LMC. This, in turn, would provide evidence for the existence of a SMBH in the LMC.

Another explanation would require the star to be the result of the merging of two stars, belonging to so-called blue stragglers class of stars, which are older than standard evolution models predict them to be. Indeed, its age could then be as much as the lifetime of a 4 solar mass star which is more than 6 times the lifetime of an 8 solar mass star.

The astronomers propose two additional observations to distinguish between the two options. The abundance of certain elements in stars belonging to the LMC is only half that of the Sun. A more precise measurement with UVES would indicate whether the star has a metal abundance appropriate to LMC stars or not. The second is to measure how much the star moves in the transverse direction on the sky, using astrometric measurements.