Quantum chaos demonstrated during atom ionisation for the first time 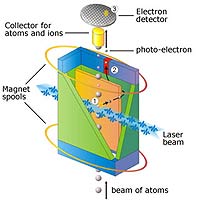 The individual atoms from a rubidium atom beam travel through a cuboid formation. Its interior contains both a strong magnetic and electric field. Magnetic coils create the magnetic field, and an electric field is generated between the inner electrode (orange) and the covered electrode (green). The laser light, which triggers the photoelectric effect, has an adjustable frequency. The measurement of the photoelectric effect is carried out in three steps: 1) each atom travelling through the laser beam takes a photon out of the laser beam with a particular probability that depends on the light frequency. We then have separation into a photoelectron and a rubidium ion. 2) Under the influence of the magnetic field and electric field, the photoelectrons move at the inner electrode. When the fields have the right shape, the electrons leave the cuboid formation at the red electrode and are separated in space from the rubidium ions. 3) As rubidium ions and non-decayed rubidium atoms are caught by a metal cylinder, the photocurrent produced by the photoelectrons hits a detector and is displayed there.

Scientists at the Max Planck Institute of Quantum Optics, investigating the chaotic behaviour of the quantum world, have been able to give the first ever demonstration of quantum chaos during atom ionisation. Using laser light, they released electrons from rubidium in a strong electromagnetic field. The researchers measured typical fluctuations in the electron current, which is subject to the frequency of the laser light, and which arose from the chaotic movement of the electrons. The experiment is based on an experiment from the early days of quantum mechanics demonstrating the photoelectric effect. (Physical Review Letters, November 4, 2005)

In the macroscopic world of everyday life we often have 'deterministic chaos'. Events like weather and ocean currents, the movement of heavenly bodies, or the growth of insect populations can all be described in exact formulas. They are indeed 'deterministic'. But the way they proceed in reality is highly sensitive to initial values. Even the smallest failure to measure the initial conditions can make a long-term prediction impossible. Physicists call such systems 'chaotic'.

Microscopic processes can also be very complex. Quantum mechanics rules out the idea that the world of atoms has 'deterministic chaos'. Among other reason for this, quantum mechanical systems develop non-deterministically from many simultaneous initial states. In quantum chaos research physicists are looking for similarities, in the quantum world, to the deterministic chaos of the everyday world. In this way, scientists at the Max Planck Institute of Quantum Optics have been investigating chaos in quantum mechanical systems that would be deterministically chaotic according to the rules of macroscopic physics.

Scientists working with Gernot Stania and Herbert Walther have now succeeded in finding the first experimental evidence of quantum chaos in a system in which the components, during the experiment, in principle can disperse in any direction. They harked back to an historical experiment: demonstrating the photoelectric effect by releasing electrons onto metal when light is projected on them.

In the classical experiment, electric voltage is created across two metal plates, one of them covered with an alkali metal. The experimenter hits the alkali metal with light at a particular frequency (and thus energy). As soon as the energy moves above a certain amount, the light frees the electrons from the metal, which is observable as electric current. Albert Einstein published his explanation for this effect a hundred years ago, which was important for the development of quantum theory and recognised with a Nobel Prize in 1921.

The scientists from the Max Planck Institute of Quantum Optics adapted the classical experiment to their needs. In the modern version, the alkali metal is not applied to a metal plate, but is replaced in the experimental setup by a flying beam of rubidium atoms (compare with image 1). The atoms are then exposed to both an electrical field and a strong magnetic field. As in the historical experiment, the atoms are only hit with a light of a particular frequency which is able to cause them to release electrons. This electron beam is measured subject to the light frequency.

Between the magnetic field, the electric field, and the electrostatic forces in the atom (the attraction of protons and electrons), three different forces are acting on the electrons in the rubidium atoms, each of which provokes very different electron movements. As long as one of these forces outweighs the others, the movement of the electrons is simple and not chaotic. That is the case, for example, when the electron has not yet absorbed laser light and finds itself near the atomic nucleus. However, in the moment in which the electron takes up a light particle, it changes to a high energy state and thus falls more under the influence of the external electromagnetic field. Its movement then becomes chaotic. In the process of this movement, the electron moves farther and farther from the nucleus, until it is free.

The chaos in the movement is demonstrated through the fact that the electron beam fluctuates in a particular way which matches the energy of the light particles. These fluctuations are called 'Ericson fluctuations'. The researchers were not only able to demonstrate the Ericson fluctuations, they were also able to adjust the initial state of the strength of the electric and magnetic field, and thus how chaotically the system behaved, according to the rules of macroscopic physics. In this way, they were able to show the connection between deterministic chaos and the fluctuations of the photocurrent. The more chaotically the system reacted, according to the rules of macroscopic physics, the stronger the measured fluctuations.