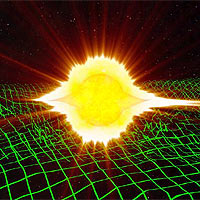 The pulsar and its companion merging. The merged object may become a black hole. (click here to view animations)

A discovery made with CSIRO's Parkes radio telescope in eastern Australia may have brought forward the day when astronomers will directly detect cosmic gravity waves for the first time.

Neutron star pairs may merge and give off a burst of gravity waves about six times more often than previously thought, says a team of scientists from Italy, Australia, the UK and the USA. Their report is published in the December issue of the journal Nature.

If neutron star pairs merge this often, gravity-wave detectors being built now might be able to detect a burst of gravity waves every year or two, rather than about once a decade - the most optimistic prediction until now.

Gravity waves were predicted by Einstein's general theory of relativity. Astronomers have indirect evidence of their existence but have not yet detected them directly.

Gravity waves will help astronomers understand many processes in the Universe. For instance, some of the waves will have been created by the formation of the first galaxies, and will carry clues to how that happened.

Neutron stars are city-sized balls of a highly dense, unusual form of matter. A pulsar is a special type - a spinning neutron star that emits radio waves.

Separated by 800,000 km - about twice the distance between the Earth and Moon - the two stars orbit each other in just over two hours.

Systems with such extreme speeds have to be modelled with Einstein's general theory of relativity.

"That theory predicts that the system is losing energy in the form of gravity waves," said lead author Marta Burgay, a PhD student at the University of Bologna.

"The two stars are in a 'dance of death', slowly spiralling together."

In 85 million years the doomed stars will fuse, rippling spacetime with a burst of gravity waves.

"If the burst happened in our time, it could be picked up by one of the current generation of gravitational wave detectors, such as LIGO-I, VIRGO or GEO," said team leader Professor Nicolo D'Amico, Director of the Cagliari Astronomical Observatory in Sardinia.

The previous estimate of the neutron-star merger rate was strongly influenced by the characteristics of just one system, the pulsar B1913+16 and its companion. PSR B1913+16 was the first relativistic binary system discovered and studied, and the first used to show the existence of gravitational radiation.

PSR J0737-3039 and its companion are an even more extreme system, and now form the best laboratory for testing Einstein's prediction of orbital shrinking.

"These two effects push the merger rate up by a factor of six or seven," said team member Dr Dick Manchester of CSIRO.

But the actual numerical value of that rate depends on assumptions about how pulsars are distributed in our Galaxy.

"Under the most favourable distribution model, we can say at the 95% confidence level that this first generation of gravitational wave detectors could register a neutron star merger every one to two years," said Dr Vicky Kalogera, Assistant Professor of Physics and Astronomy at Northwestern University in Illinois, USA.

The new result is "good news for gravity-wave astronomers," according to team member Professor Andrew Lyne, Director of the Jodrell Bank Observatory of the University of Manchester in the UK.

"They may get to study one of these cosmic catastrophes every few years, instead of having to wait half a career," he said.