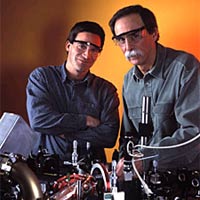 NIST physicists Dietrich Leibfried and David Wineland in the laboratory where they have developed a method for correcting data handling errors for quantum computing.

A practical method for automatically correcting data-handling errors in quantum computers has been developed and demonstrated by physicists at the National Institute of Standards and Technology (NIST).

Described in the Dec. 2, 2004, issue of the journal Nature, the NIST work is the first demonstration of all the steps of error correction for quantum computers, a futuristic, potentially very powerful form of computing that uses the quantum properties of atoms or other particles as 1s and 0s for processing data. The method was implemented using ions (electrically charged atoms) as quantum bits (qubits). Ions are arguably the leading candidate for use as qubits in a quantum computer.

Conventional computers use electronic switches that are either on or off to represent 1s and 0s that then can be stored or manipulated to make calculations. Quantum computing would use the quantum states of matter (such as magnetic properties) as 1s, 0s—or even both at once. The unusual features of the quantum world provide extra computational power, offering the prospect of carrying out a massive number of simultaneous calculations to solve problems that are impossible to solve today. Specific applications could include code-breaking of unprecedented power, faster database searching, fraud-proof digital signatures and optimization of everything from communications systems to airline schedules. But unless data-handling errors are corrected, “noise” caused by environmental disturbances, such as fluctuating magnetic fields associated with electrical equipment, could diminish any gains over today’s computers.

The new NIST method helps to ensure the correctness of data during computations by creating redundant data sets, or what might be called quantum backup copies. “The basic concept is a familiar one: If someone doesn’t understand what you say, you repeat it several times, and eventually they’ll get it,” explains physicist Dietrich Leibfried, who developed the approach and helped to demonstrate its feasibility in NIST’s Boulder, Colo., laboratories.

Direct copying of qubits is prohibited by the rules of quantum mechanics, nature’s instruction book for the smallest particles of matter. Like all known quantum error correction methods, the NIST method gets around this obstacle by exploiting a famously spooky (the term used by Einstein) feature of quantum mechanics that allows the “entanglement” of physically separated atoms to link their quantum properties in predictable ways. The atoms also are prepared in a special “superposition” state in which they represent both 1 and 0 at the same time.

The demonstration used three beryllium ions as qubits. One “primary” ion is entangled with two “helper” ions as part of a series of encoding steps. The primary qubit is essential to the computation; the other two are expendable. Because the three are entangled, errors in one affect the others, a condition that is reflected in the joint quantum state of all three qubits. If the quantum state of the primary qubit is accidentally changed, the mistake can be detected and corrected by reversing the steps to decode the data, and then measuring the values of the two extra qubits.

Unlike other demonstrations of quantum error correction, the NIST approach makes corrections based on actual measurements, allows qubits to be “reset” on the fly, and could be scaled up for use in quantum computers of practical size and utility. Previous demonstrations by other groups have involved correction of errors in qubits made of molecules in a liquid, without the ability to measure or reset and reuse the extra qubits needed to detect errors. The ability to “empty the trash bin,” rather than simply storing mistakes somewhere in the computer, makes the NIST approach more practical.

Error correction is routine in today’s computing and communications systems. For instance, a sender might periodically add up a series of sent bit values and transmit the total to the receiver. Once the same bits are received, the values are also summed at the receiver and the two totals are compared. If the totals match, there is a high probability that the bits arrived in the correct state. If the totals differ, then the data were corrupted, and the original bits are re-sent. This approach would fail in quantum information systems because measuring a qubit destroys its quantum state and effectively stops the computation. Therefore, errors need to be detected indirectly, as in the NIST method. It is not necessary to know the value of the primary qubit in order to detect an error and correct it.

To verify that the method works, NIST scientists performed many experiments with beryllium ion qubits and compared the corrected quantum states to the initial and uncorrected states. The instrumentation and procedures for manipulating qubits need to be improved to build reliable quantum computers, but such improvements seem feasible, Leibfried says. In addition, more ions and a more complex approach would be needed to correct all possible types of errors.

The research was supported in part by the Advanced Research and Development Activity and the National Security Agency.

The NIST quantum error correction method is a way of using a set of three atomic qubits to detect and correct data-handling errors in one of the qubits.

Three beryllium ions (charged atoms) are held in a tiny, micrometer-sized electromagnetic trap, where their quantum states are manipulated with ultraviolet laser beams and their physical movement is controlled with electrodes. One ion is the primary qubit containing the data essential to a computation; the other two are “helper” qubits.

An ion’s quantum state includes properties such as the orientation of its “magnetic moment” (which can be thought of as a little compass needle inside the ion, with north and south poles). For quantum computing purposes, this is called the “spin,” because a spinning electrical charge is one way to create a magnetic moment. The digital values 1 and 0 are represented by the direction of the spin. “Spin up,” corresponding to 0, has a greater energy than “spin down,” corresponding to 1.

Atoms can exist in both states at once, a condition called “quantum superposition,” and, therefore can represent both 0 and 1 at the same time. On a sphere representing all possible spin states, a superposition can be visualized as a tilt of the north-south axis, at an angle that depends on whether the state is closer to (i.e., has a greater probability of being) 0 or 1. When a qubit is measured by probing it with a laser, the state collapses to 0 or 1, with a rate of occurrence that depends on the angle of the ion’s tilt (or the probability of its being 1 or 0). For example, when the ion’s axis points directly to the side (i.e., the axis is horizontal), the qubit will have an equal probability of collapsing to spin up or to spin down. For each single experiment it will collapse to one of the two states; but if the experiment is repeated 100 times, the qubit will, on average, collapse to spin down 50 times, and to spin up 50 times

In the NIST error correction procedure, the primary qubit is prepared in a superposition of spin up and spin down. Then the data in this qubit are “encoded” in the set of three qubits by putting the three ions through a series of processing steps, or what a scientist would call “quantum logic gates.” This has the effect of correlating the quantum properties of all three qubits so that an action on one produces a predictable outcome on the others. One type of logic gate places the two extra ions in superposition states. Another type of logic gate has the effect of entangling the three ions, so their quantum states are related to each other in a particular choreography. Overall, these processing steps place the entangled system in a superposition of several possible quantum spin states of the three atoms.

Scientists then use lasers to purposely introduce errors—spin flips, or reversals—into all the qubits simultaneously, as might occur in a real computer due to environmental disturbances. The exact nature of the errors occurring in a single run of the experiment depends partly on the length of the laser pulse hitting the ions, and partly on the unusual features of quantum mechanics, which, like a coin toss, produces results that can be predicted only in terms of probabilities, as described earlier. So, from run to run, different errors might occur, and the correction steps described below would be adapted to the situation in that particular run. (Scientists can rigorously characterize the performance of the error-correcting procedure by using well-characterized laser pulses so they know exactly what type of “error” occurred.)

Then the quantum logic operations are performed in reverse order to “decode” the data in the entangled system. The process is designed so that the qubit state needed for the computation is transferred back to the primary qubit, and the error information is contained in the two extra qubits. These two then are measured by hitting them with a different laser pulse that either makes them fluoresce (like a light bulb that turns on) if they are spin down, or remain dark if they are spin up. This procedure forces their states to collapse to one of four possible outcomes (spin up/spin up, spin down/spin up, spin up/spin down, spin down/spin down), depending on the error that occurred.

At the time of measurement, the primary qubit is disentangled from the helper qubits and left in either its original superposition state or one of two slightly altered versions of that state, rotated around a particular axis. The final values of the two helper qubits herald which of these cases occurred, so that corrections can be made if needed. For instance, the routine is designed so that, if both extra ions are spin down, then the spin of the primary qubit was flipped around a particular axis and can be corrected with a precisely timed laser pulse to undo that flip. The two extra qubits then can be reset and used again to detect and correct future errors.