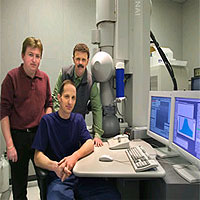 Advanced ceramics are wonderful materials – they withstand temperatures that would melt steel and resist most corrosive chemicals. If only they weren’t so brittle. Poor resistance to fracture damage has been the major drawback to the widespread use of advanced ceramics as structural materials. Help, however, may be on the way.

A collaboration of scientists led by researchers with the U.S. Department of Energy’s Lawrence Berkeley National Laboratory (Berkeley Lab) has uncovered clues at the atomic level that could lead to a new generation of much tougher advanced ceramics to be used in applications like gas turbine engines.

Working with the unique facilities at Berkeley Lab’s National Center for Electron Microscopy (NCEM), the collaboration has produced atomic-resolution images of silicon nitride ceramics that were sintered with oxides of rare earth elements to toughen them up and prevent cracks from spreading. These images revealed, for the first time, the exact location of each rare-earth atom in the final material and how their presence affected its toughness.

'Our findings are a prime factor in understanding the origin of the mechanical properties in advanced ceramics and should make it possible to do the precise tailoring in the future that will critically improve the performances of these materials over a wide range of applications,' says Robert Ritchie, a materials scientist who holds a joint appointment with Berkeley Lab’s Materials Sciences Division and the University of California at Berkeley’s Department of Materials Science and Engineering.

Ritchie and Alexander Ziegler, a member of Ritchie’s research group, were the principal authors of a paper by the collaboration which appears in the December 3 issue of the journal Science. The other co-authors were Christian Kisielowski and Nigel Browning of Berkeley Lab, Juan Idrobo of UC Davis, and Michael Cinibulk of the Air Force Research Laboratory in Ohio.

Ceramics are probably the oldest construction materials known, their use dating back thousands of years, when they were made from wet clay and baked at high temperatures until hard. Today’s advanced ceramics are made from powders of complex chemical compounds and their production requires careful control at every stage of the process.

Much attention is currently being focused on silicon nitride advanced ceramics, which are considered to be leading candidates as structural materials for future gas turbine engines. These engines, which are projected for use in electrical power plants, among other applications, will burn fuel at temperatures of around 1,200 degrees Celsius (2,192 degrees Fahrenheit), well beyond the tolerance of metals, even nickel-base super-alloys. Running at such high temperatures, the advanced gas turbines are expected to achieve a much higher thermal-to-electricity efficiency than today’s steam-driven electrical power plants, while emitting far less greenhouse gases. For this to happen, however, the brittleness problem of the silicon nitride ceramics must be solved.

Says Ziegler, 'To enhance the toughness of a silicon nitride ceramic, it is often necessary to engineer a thin (nanoscale) film in the ceramic’s grain boundaries, which cracks when the ceramic begins to fracture. This promotes the formation of grain bridges which span across the crack, making it more difficult for the crack to propagate.'

Understanding the nature and properties of these nano-sized intergranular films is crucial to enhancing ceramic toughness, according to Ritchie and Ziegler. However, critical information about the chemical composition, atomic structure and bonding characteristics of such films has long been missing.

'The problem was the nanometer dimensions of the intergranular films,' Ziegler says. 'To gain information on the local atomic structure and bonding characteristics requires characterization at Ångstrøm (single-atom) to sub-Ångstrøm scales. Until recently, no microscopes or chemical analysis probes have been able to resolve such information at these length scales.'

NCEM, however, houses a Scanning Transmission Electron Microscope (STEM) which is optimized for materials applications that require the highest resolutions for both imaging and spectroscopy. With the help of NCEM staff members Kisielowski and Browning, Ritchie, Ziegler and the collaboration used this microscope, in combination with an imaging technique called 'high-angle annular dark-field STEM,' and a chemical analysis technique, called electron-energy-loss-spectroscopy (EELS), to examine a silicon nitride ceramic doped with several different rare-earth elements. They specifically looked at how the atomic bonding configuration of the intergranular phase changed with a change in the rare earth sintering additive.

'We were able to determine the exact location of each rare-earth atom and to see how these atoms specifically bonded to the interface between the intergranular phase and the matrix grains of the ceramic,' Ritchie says. 'We saw that each rare-earth element attaches to the interface differently, depending on its atomic size, electronic configuration, and the presence of oxygen atoms along the interface. This information can be related to the fracture toughness of the ceramic, which means we should be able to atomistically tailor the grain boundaries in future ceramics to give optimum mechanical properties.'

The collaboration says that its results with the silicon nitride ceramic and the rare earth glassy films should be applicable to other types of advanced ceramics as well.

Says Ritchie, 'It's interesting, but intergranular glassy films used to be thought of as an undesirable feature in ceramics, much like inclusions in steels. We now realize they are the key feature that promotes ceramic toughness.'