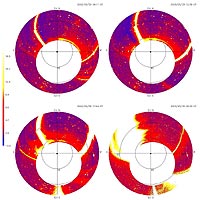 Photo sequence from top left to bottom right showing high energy electrons in yellow and red approaching Earth. Sun is at the center of the photo.

Using an orbiting camera designed to block the light from the sun and stars, an international team of solar physicists has been able for the first time to directly image clouds of electrons surrounding Earth that travel from the sun during periods of solar flare activity.

These electron clouds, a part of the solar atmosphere that extends millions of miles from the sun, cause geomagnetic storms that can disrupt communications satellites, expose high-flying aircraft to excess radiation and even damage ground-based power-generating facilities.

The images taken by this new camera, which will be discussed at a scientific session and news conference at the fall meeting in San Francisco of the American Geophysical Union, should allow space weather forecasters to substantially improve their predictions of geomagnetic storms.

"Until now, we didn’t have a good way to view the clouds of electrons that pass Earth from coronal mass ejections," said Bernard V. Jackson, a solar physicist at the University of California, San Diego. "We are living inside the solar atmosphere, but up until now had no way to view it, so space forecasters couldn’t be certain whether an ejection from the sun would affect the Earth one to five days later or harmlessly pass us by. Now that we can see these clouds as they travel through space outward from the sun, we can map their trajectories."

The orbiting camera, known as the Solar Mass Ejection Imager, was built by scientists and engineers at UCSD, the Air Force Research Laboratory, University of Birmingham in the United Kingdom, Boston College and Boston University. The instrument was launched in January by the Air Force and has provided the team of scientists with numerous images of coronal mass ejections, which can be seen in the images because of the faint scattering of sunlight from the clouds of electrons.

To the surprise of the scientists, the images also revealed the existence of high-altitude auroras, extending more than 500 miles above the Earth’s surface. Such auroras had previously been reported by space-shuttle astronauts, but their observations were questioned because air molecules were not thought to exist in sufficient quantity at that altitude to produce such light displays.

Bright auroras seen from the surface of our planet in the high northern and southern latitudes are caused by pulses of charged particles, mostly electrons, from the sun that overload the Earth’s lower radiation belt and are discharged into the atmosphere, colliding with air molecules in the atmosphere in shimmering displays of colorful light known as the northern (or southern) lights. Auroras typically extend from 60 miles above Earth’s surface to several hundred miles. But at 500 miles above the Earth’s surface, the density of air molecules is not enough to permit auroras—or so scientists have long believed.

"It’s a mystery," said Jackson of UCSD’s Center for Astrophysics and Space Sciences. "This is far higher than anyone had ever expected. It may be that nitrogen from the ionosphere is ejected into the higher altitudes during a coronal mass ejection."

The auroras were first noted by Andrew Buffington, another UCSD solar physicist, while combing through data taken by the Solar Mass Ejection Imager. In a series of image frames taken four seconds apart during a coronal mass ejection in late May, Buffington detected a bright source of light, 100 times brighter than the scattering of sunlight from the electrons. Similar sequences were seen during subsequent mass ejections by Buffington and Boston College scientists Don Mizuno and Dave Webb.

"We’ve observed high-altitude auroras during all of the coronal mass ejection events that engulfed Earth since the instrument became operational," says Jackson. "In fact, the last big event in late October had a lot of auroras associated with it. But we still don’t understand the process that is causing them."

He said researchers at the Air Force Research Laboratory are presently studying the data to come up with some possible explanations. The project was financed by the U.S. Air Force, National Aeronautics and Space Administration, National Science Foundation and the University of Birmingham.