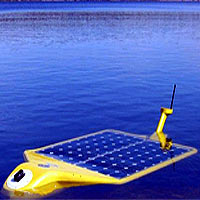 A collaborative group of researchers are conducting experiments with underwater robots at Rensselaer's Darrin Fresh Water Institute (DFWI) on Lake George, N.Y., as part of the RiverNet project, an NSF-funded initiative. The group is working to develop a network of distributed sensing devices and water-monitoring robots, including solar-powered autonomous underwater vehicles (SAUVs), for detection of chemical and biological trends that may guide the management and improvement of water quality.

SAUVs are a new technology that will allow underwater robots to be deployed long-term by using solar power. Autonomous underwater vehicles (AUVs) equipped with sensors are currently used for water monitoring, but must be taken out of the water frequently to recharge the batteries.

The goal of ongoing experimentation is to develop SAUVs that will communicate and network together, thus allowing a coordinated effort of long-term monitoring, according to Art Sanderson, professor of electrical, computer, and systems engineering at Rensselaer and principal investigator of the RiverNet project. Key technologies used in SAUVs include integrated sensor microsystems, pervasive computing, wireless communications, and sensor mobility with robotics.

During recent tests in Lake George at the DFWI, two SAUVs and one AUV were deployed to test communication, interaction, and maneuvering capabilities. Researchers were encouraged by the success of the networking capabilities.

'The Lake George field tests provided us an excellent opportunity to further our research and technology development of SAUVs,' said Sanderson. 'Once fully realized, this technology will allow better monitoring of complex environmental systems, including the Hudson River.'

'This research is a significant step toward obtaining real-time, 3-D sensor monitoring of water quality,' said Sandra Nierzwicki-Bauer, chair of the external advisory committee of the Upper Hudson Satellite of the Rivers and Estuaries Center, director of the Darrin Fresh Water Institute, and professor of biology at Rensselaer.