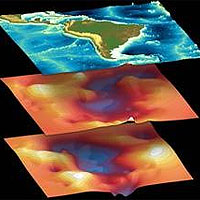 Seismologists recently have recast their understanding of the inner workings of Earth from a relatively benign homogeneous environment to one that is highly dynamic and chemically diverse.

This new view of Earth’s inner workings depicts the planet as a living organism, where events that happen deep inside can affect what happens at its surface – such as the rub and slip of tectonic plates, or the rumble of the occasional volcano.

New research into these dynamic inner workings are showing that Earth’s upper mantle (an area that extends down to 660 kilometers, or about 410 miles) exhibits how far more than just temperature and pressure play a role in the dynamics of the deep interior.

A study by Nicholas Schmerr, a doctoral student in ASU’s School of Earth and Space Exploration, is shedding light on these processes and showing that they are not just temperature-driven. His work helps assess the role chemistry plays in the structure of Earth’s mantle.

The simplest model of the mantle – the layer of the Earth’s interior just beneath the crust – is that of a convective heat engine. Like a pot of boiling water, the mantle has parts that are hot and welling up, as in the mid-Atlantic rift, and parts that are cooler and sinking, as in subduction zones. There, the crust sinks into the Earth, mixing and transforming into different material “phases,” like graphite turning into diamond.

“A great deal of past research on mantle structure has interpreted anomalous seismic observations as due to thermal variations within the mantle,” Schmerr says. “We’re trying to get people to think about how the interior of the Earth can be not just thermally different in different regions, but also chemically different.”

The research, which Schmerr conducted with Edward Garnero, a School of Earth and Space Exploration professor, was published in the Oct. 26 issue of the journal Science. Their article is titled “Upper Mantle Discontinuity Topography from Thermal and Chemical Heterogeneity.”
Schmerr’s work shows that Earth’s interior is far from homogeneous, as represented in traditional views, but possesses an exotic brew of down and upwelling material that goes beyond simply hot and cold convection currents. His work demonstrates the need for a chemical component in the convection process.

At key depths within Earth, rock undergoes compression to a denser material, where its atoms rearrange from the ever-increasing pressure. Earth scientists have long known that the dominant mineral olivine in Earth’s outer shell compresses into another mineral named wadsleyite at a depth of 410 kilometers (255 miles), which then changes into ringwoodite around 520 kilometers (325 miles), and then again into perovskite and magnesiowüstite at 660 kilometers (410 miles).

These changes in crystal structure, called “phase transitions,” are sensitive to temperature and pressure, and the transition depth moves up and down in the mantle in response to relatively hot or cold material.

Beneath South America, Schmerr’s research found the 410-kilometer phase boundary bending the wrong way. The mantle beneath South America is predicted to be relatively cold because of cold and dense former oceanic crust and the underlying tectonic plate sinking into the planet from the subduction zone along the continent’s western coast. In such a region, the 410-kilometer boundary normally would be upwarped – but by using energy from far-away earthquakes that reflect off the deep boundaries in this study area, Schmerr and Garnero found that the 410-kilometer boundary significantly deepened.

“Our discovery of the 410-kilometer boundary deflecting downward in this region is incompatible with previous assumptions of upper-mantle phase boundaries being dominantly modulated by the cold temperature of the subducting crust and plate,” Garnero says.

Geologists and geochemists have long suspected that subduction processes are driven by more than temperature alone. A sinking oceanic plate is compositionally distinct from the mantle, and brings with it minerals rich in elements that can alter the range of temperatures and pressures at which a phase change takes place.

“We’re not the first to suggest chemical heterogeneities in the mantle,” Schmerr says. “However, we are the first to suggest hydrogen or iron as an explanation for an observation at this level of detail, and over a geographical region spanning several thousands of kilometers.”

Hydrogen from ocean water can be bonded to minerals within the crust and carried down as it is subducted into the mantle, Schmerr says. When the plate reaches the 410-kilometer phase boundary, the hydrogen affects the depth of the olivine to wadsleyite phase transition, reducing the density of the newly formed wadsleyite, and making it relatively more buoyant than its surrounding material. This hydrated wadsleyite then “pools” below the 410-kilometer boundary, and the base of the wet zone reflects the seismic energy observed by Schmerr.

Alternatively, subduction can bring the iron-poor and magnesium-enriched residues of materials that melted near the surface to greater depths. Mantle mineral compositions enriched in magnesium are stable to greater depths than usual, resulting in a deeper phase transition.

“Either hypothesis explains our observation of a deep 410-kilometer boundary beneath South American subduction, and both ideas invoke chemical heterogeneity,” Schmerr says. “However, if we look deeper, at the 660-kilometer phase transition, we find it at a depth consistent with the mantle being colder there. This tells us that the mantle beneath South America is both thermally cold and chemically different.”

To make their observations, Schmerr and Garnero used data from the USArray, which is part of the National Science Foundation-funded EarthScope project.

“The USArray essentially is 500 seismometers that are deployed in a movable grid across the United States,” Schmerr says. “It’s an unheard-of density of seismometers.”

Schmerr and Garnero used seismic waves from earthquakes to measure where phase transitions occur in the interior of Earth by looking for where waves reflect off these boundaries. In particular, they used a set of seismic waves that reflect off the underside of phase transitions halfway between the earthquake and the seismometer. The density and other characteristics of the material they travel through affect how the waves move, and this gives geologists an idea of the structure of the inner Earth.

“Seismic discontinuities are abrupt changes in density and seismic wave speeds that usually occur where a mineral undergoes a phase change – such as when olivine transitions to wadsleyite, or ringwoodite transforms into perovskite and magnesiowüstite,” Schmerr says. “The transformed mineral is generally denser, and typically seismic waves travel faster through it as well. Discontinuities reflect seismic energy, which allows us to figure out how deep they are. They are found throughout the world at certain average depths – in this case, at 410 kilometers and 660 kilometers. Because these phase transitions are not always uniform, these layers are bumpy with ridges and troughs.

“Right now, the big question that we have is about Earth’s thermal state and its chemical state, and there are a lot of ways we can go about getting at that information. This study lets us look at one particular area in Earth and constrain the temperature and composition to a certain degree, imaging this structure inside the Earth, and saying, ‘These are not just thermal effects. There’s also some sort of chemical aspect to it, as well.’ ”