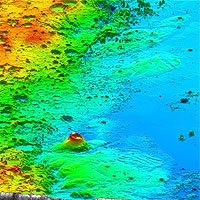 Radar Slice Through Subsurface of Equatorial Deposits on Mars

The westward-looking view includes the divide between Martian highlands on the south and lowlands on the north, spanning a range from about 12 degrees south latitude (left edge of image) to 5 degrees north latitude (right edge of image). The deposits of the Medusae Fossae Formation are found in the lowlands along the divide, in the center foreground. The radar sounder on the European Space Agency's Mars Express orbiter has revealed echoes from what is interpreted as a boundary between the overlying deposits and underlying lowland plains buried by these deposits.

The radar information presented here is from downward-looking radar observations by the Mars Advanced Radar for Subsurface and Ionospheric Sounding (MARSIS, jointly funded by NASA and the Italian Space Agency) as Mars Express flew a south-to-north path at about 188 degrees east longitude. The topographic map, using 1990s data from the Mars Orbiter Laser Altimeter instrument on NASA's Mars Global Surveyor orbiter, extends from that transect to about 135 degrees east longitude.

NASA's Jet Propulsion Laboratory manages NASA's roles in Mars Express for the NASA Science Mission Directorate, Washington. JPL is a division of the California Institute of Technology, in Pasadena.

The radar system on the European Space Agency's Mars Express orbiter has uncovered new details about some of the most mysterious deposits on Mars: the Medusae Fossae Formation. It has provided the first direct measurement of the depth and electrical properties of these materials, providing new clues about their origin.

The Medusae Fossae Formation consists of enigmatic deposits. Found near the Martian equator along a divide between highlands and lowlands, they may represent some of the youngest deposits on the surface of the planet. This is implied because there is a marked lack of impact craters dotting these deposits.

'This is the first direct measurement of the depth of these deposits,' said Thomas Watters of the Smithsonian Institution, Washington, D.C., lead author of a new report on the findings in the journal Science. 'We didn't know whether they were just a thin veneer or much thicker.' The radar observations found the Medusae Fossae Formation to be massive deposits more than 2.5 kilometers (1.4 miles) thick in places. The instrument reveals the depth based on the time it takes for the radar beam to pass through the layers and bounce off the plains material underneath.

The Medusae Fossae deposits intrigue scientists because they are associated with regions that absorb certain wavelengths of Earth-based radar. This had led to them being called 'stealth' regions, because they give no radar echo. However, the radar instrument on Mars Express uses longer wavelengths than Earth-based radar experiments. At these wavelengths, the radar waves mostly pass through the deposits, creating subsurface echoes when the radar signal reflects off the plains material beneath.

A variety of scenarios has been proposed for the origin and composition of these deposits. Firstly, they could be volcanic ash deposits from now-buried vents or nearby volcanoes. Secondly, they could be deposits of wind-blown materials eroded from Martian rocks. Thirdly, they could be ice-rich deposits, somewhat similar to the layered ice deposits at the poles of the planet, but formed when the spin axis of Mars tilts over, making the equatorial region colder.

Deciding among these scenarios is not easy, even with the new data. The Marsis data reveal the electrical properties of the layers. These suggest that the layers could be poorly packed, fluffy, dusty material. However it is difficult to understand how porous material from wind-blown dust can be more than two kilometers (more than a mile) thick and yet not be compacted under the weight of the overlying material.

On the other hand, although the electrical properties are consistent with water-ice layers, there is no other strong evidence for the presence of ice today in the equatorial regions of Mars. 'If there is water ice at the equator of Mars, it must be buried at least several meters below the surface,' said co-author Jeffrey Plaut of JPL. This is because the water vapor pressure on Mars is so low that any ice near the surface would quickly evaporate.

So, the mystery of Mars's Medusae Fossae Formation continues. 'It is still early in the game. We may get cleverer with our analysis and interpretation, or we may only know when we go there with a drill and see for ourselves,' Plaut said.

Giovanni Picardi at the University of Rome 'La Sapienza,' Italy, principal investigator of the radar experiment, said 'Not only is Marsis providing excellent scientific results, but the team is also working on the processing techniques that will allow for more accurate evaluation of the characteristics of the subsurface layers and their constituent material. Hence, the possible extension of the mission will be very important to increase the number of observations over the regions of interest and improve the accuracy of the evaluations.'

The Mars Advanced Radar for Subsurface and Ionospheric Sounding was funded by NASA and the Italian Space Agency and developed by the University of Rome in partnership with JPL. Italy provided the instrument's digital processing system and integrated the parts. The University of Iowa, Iowa City, built the transmitter for the instrument, JPL built the receiver, and Astro Aerospace, Carpinteria, Calif., built the antenna. JPL is a division of the California Institute of Technology in Pasadena.