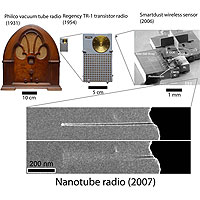 Over the past century, radio has shrunk dramatically from the wooden 'cathedral' style radios of the 1930s to the pocket-sized transistor radios of the 1950s and more recently to the single-chip radios found in cell phones and wireless sensors. Continuing this trend, we have further miniaturized the radio by cleverly implementing multiple radio functions with a single component, the carbon nanotube. This nanotube radio is over nineteen orders-of-magnitude smaller than the Philco vacuum tube radio from the 1930s!

Physicists at the University of California, Berkeley, have built the smallest radio yet - a single carbon nanotube one ten-thousandth the diameter of a human hair that requires only a battery and earphones to tune in to your favorite station.

The scientists successfully received their first FM broadcast last year - Derek & The Dominos' 'Layla' and the Beach Boys' 'Good Vibrations' transmitted from across the room. In homage to last year's 100th anniversary of the first voice and music radio transmission, they also transmitted and successfully tuned in to the first music piece broadcast in 1906, the 'Largo' from George Frederic Handel's opera 'Xerxes.'

'We were just in ecstasy when this worked,' said team leader Alex Zettl, UC Berkeley professor of physics. 'It was fantastic.'

The nanoradio, which is currently configured as a receiver but could also work as a transmitter, is 100 billion times smaller than the first commercial radios, and could be used in any number of applications - from cell phones to microscopic devices that sense the environment and relay information via radio signals, Zettl said. Because it is extremely energy efficient, it would integrate well with microelectronic circuits.

'The nanotube radio may lead to radical new applications, such as radio-controlled devices small enough to exist in a human's bloodstream,' the authors wrote in a paper published online today (Wednesday, Oct. 31) by the journal Nano Letters. The paper will appear in the print edition of Nano Letters later in November.

Authors of the nanoradio paper are Zettl, graduate student Kenneth Jensen, and their colleagues in UC Berkeley's Center of Integrated Nanomechanical Systems (COINS) and in the Materials Sciences Division at Lawrence Berkeley National Laboratory (LBNL). COINS is a Nanoscale Science and Engineering Research Center supported by the National Science Foundation (NSF).

Nanotubes are rolled-up sheets of interlocked carbon atoms that form a tube so strong that some scientists have suggested using a nanotube wire to tether satellites in a fixed position above Earth. The nanotubes also exhibit unusual electronic properties because of their size, which, for the nanotubes used in the radio receiver, are about 10 nanometers in diameter and several hundred nanometers long. A nanometer is one billionth of a meter; a human hair is about 50,000-100,000 nanometers in diameter.

In the nanoradio, a single carbon nanotube works as an all-in-one antenna, tuner, amplifier and demodulator for both AM and FM. These are separate components in a standard radio. A demodulator removes the AM or FM carrier frequency, which is in the kiloHertz and megaHertz range, respectively, to retrieve the lower frequency broadcast information.

The nanoradio detects radio signals in a radically new way - it vibrates thousands to millions of times per second in tune with the radio wave. This makes it a true nanoelectromechanical device, dubbed NEMS, that integrates the mechanical and electrical properties of nanoscale materials.

In a normal radio, ambient radio waves from different transmitting stations generate small currents at different frequencies in the antenna, while a tuner selects one of these frequencies to amplify. In the nanoradio, the nanotube, as the antenna, detects radio waves mechanically by vibrating at radio frequencies. The nanotube is placed in a vacuum and hooked to a battery, which covers its tip with negatively charged electrons, and the electric field of the radio wave pushes and pulls the tip thousands to millions of times per second.

Although it might seem that the vibrating nanotube yields a 'one station' radio, the tension on the nanotube also influences its natural vibration frequency, just as the tension on a guitar string fine tunes its pitch. As a result, the physicists can tune in a desired frequency or station by 'pulling' on the free tip of the nanotube with a positively charged electrode. This electrode also turns the nanotube into an amplifier. The voltage is high enough to pull electrons off the tip of the nanotube and, because the nanotube is simultaneously vibrating, the electron current from the tip is an amplified version of the incoming radio signal. This is similar to the field-emission amplification of old vacuum tube amplifiers used in early radios and televisions, Zettl said. The amplified output of this simple nanotube device is enough to drive a very sensitive earphone.

Finally, the field-emission and vibration together also demodulate the signal.

'I hate to sound like I'm selling a Ginsu knife - But wait, there's more! It also slices and dices! - but this one nanotube does everything; it performs all radio functions simultaneously and extremely efficiently,' Zettl said. 'It's ridiculously simple - that's the beauty of it.'

Zettl's team assembles the nanoradios very simply, too. From nanotubes copiously produced in a carbon arc, they glue several to a fixed electrode. In a vacuum, they bring the electrode within a few microns of a second electrode, close enough for electrons to jump to it from the closest nanotube and create an electrical circuit. To achieve the desired length of the active nanotube, the team first runs a large current through the nanotube to the second electrode, which makes carbon atoms jump off the tip of the nanotube, trimming it down to size for operation within a particular frequency band. Connect a battery and earphones, and voila!

Reception by the initial radios is scratchy, which Zettl attributes in part to insufficient vacuum. In future nanoradios, a better vacuum can be obtained by insuring a cleaner environment, or perhaps by encasing the single nanotube inside a second, larger non-conducting nanotube, thereby retaining the nanoscale.

Zettl won't only be tuning in to oldies stations with his nanoradio. Because the radio static is actually the sound of atoms jumping on and off the tip of the nanotube, he hopes to use the nanoradio to sense the identity of atoms or even measure their masses, which is done today by cumbersome large mass spectrometers.

Coauthors with Jensen and Zettl are UC Berkeley post-doctoral fellow Jeff Weldon and physics graduate student Henry Garcia. The work was supported by NSF and the U.S. Department of Energy.