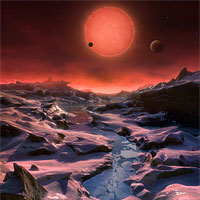 This artist’s impression shows an imagined view from the surface one of the three planets orbiting an ultracool dwarf star just 40 light-years from Earth that were discovered using the TRAPPIST telescope at ESO’s La Silla Observatory. These worlds have sizes and temperatures similar to those of Venus and Earth and are the best targets found so far for the search for life outside the Solar System. They are the first planets ever discovered around such a tiny and dim star.

In this view one of the inner planets is seen in transit across the disc of its tiny and dim parent star.

Astronomers using the TRAPPIST telescope at ESO’s La Silla Observatory have discovered three planets orbiting an ultracool dwarf star just 40 light-years from Earth. These worlds have sizes and temperatures similar to those of Venus and Earth and are the best targets found so far for the search for life outside the Solar System. They are the first planets ever discovered around such a tiny and dim star. The new results will be published in the journal Nature on 2 May 2016.

A team of astronomers led by Michaël Gillon, of the Institut d’Astrophysique et Géophysique at the University of Liège in Belgium, have used the Belgian TRAPPIST telescope [1] to observe the star 2MASS J23062928-0502285, now also known as TRAPPIST-1. They found that this dim and cool star faded slightly at regular intervals, indicating that several objects were passing between the star and the Earth [2]. Detailed analysis showed that three planets with similar sizes to the Earth were present.

TRAPPIST-1 is an ultracool dwarf star — it is much cooler and redder than the Sun and barely larger than Jupiter. Such stars are both very common in the Milky Way and very long-lived, but this is the first time that planets have been found around one of them. Despite being so close to the Earth, this star is too dim and too red to be seen with the naked eye or even visually with a large amateur telescope. It lies in the constellation of Aquarius (The Water Carrier).

Emmanuël Jehin, a co-author of the new study, is excited: “This really is a paradigm shift with regards to the planet population and the path towards finding life in the Universe. So far, the existence of such ‘red worlds’ orbiting ultra-cool dwarf stars was purely theoretical, but now we have not just one lonely planet around such a faint red star but a complete system of three planets!”

Michaël Gillon, lead author of the paper presenting the discovery, explains the significance of the new findings: 'Why are we trying to detect Earth-like planets around the smallest and coolest stars in the solar neighbourhood? The reason is simple: systems around these tiny stars are the only places where we can detect life on an Earth-sized exoplanet with our current technology. So if we want to find life elsewhere in the Universe, this is where we should start to look.'

Astronomers will search for signs of life by studying the effect that the atmosphere of a transiting planet has on the light reaching Earth. For Earth-sized planets orbiting most stars this tiny effect is swamped by the brilliance of the starlight. Only for the case of faint red ultra-cool dwarf stars — like TRAPPIST-1 — is this effect big enough to be detected.

Follow-up observations with larger telescopes, including the HAWK-I instrument on ESO’s 8-metre Very Large Telescope in Chile, have shown that the planets orbiting TRAPPIST-1 have sizes very similar to that of Earth. Two of the planets have orbital periods of about 1.5 days and 2.4 days respectively, and the third planet has a less well determined period in the range 4.5 to 73 days.

'With such short orbital periods, the planets are between 20 and 100 times closer to their star than the Earth to the Sun. The structure of this planetary system is much more similar in scale to the system of Jupiter’s moons than to that of the Solar System,' explains Michaël Gillon.

Although they orbit very close to their host dwarf star, the inner two planets only receive four times and twice, respectively, the amount of radiation received by the Earth, because their star is much fainter than the Sun. That puts them closer to the star than the habitable zone for this system, although it is still possible that they possess habitable regions on their surfaces. The third, outer, planet’s orbit is not yet well known, but it probably receives less radiation than the Earth does, but maybe still enough to lie within the habitable zone.

'Thanks to several giant telescopes currently under construction, including ESO’s E-ELT and the NASA/ESA/CSA James Webb Space Telescope due to launch for 2018, we will soon be able to study the atmospheric composition of these planets and to explore them first for water, then for traces of biological activity. That's a giant step in the search for life in the Universe,' concludes Julien de Wit, a co-author from the Massachusetts Institute of Technology (MIT) in the USA.

This work opens up a new direction for exoplanet hunting, as around 15% of the stars near to the Sun are ultra-cool dwarf stars, and it also serves to highlight that the search for exoplanets has now entered the realm of potentially habitable cousins of the Earth. The TRAPPIST survey is a prototype for a more ambitious project called SPECULOOS that will be installed at ESO’s Paranal Observatory [3].
Notes

[1] TRAPPIST (the TRAnsiting Planets and PlanetesImals Small Telescope) is a Belgian robotic 0.6-metre telescope operated from the University of Liège and based at ESO’s La Silla Observatory in Chile. It spends much of its time monitoring the light from around 60 of the nearest ultracool dwarf stars and brown dwarfs (“stars” which are not quite massive enough to initiate sustained nuclear fusion in their cores), looking for evidence of planetary transits.The target in this case, TRAPPIST-1, is an ultracool dwarf, with about 0.05% of the Sun’s luminosity and a mass of about 8% that of the Sun.

[2] This is one of the main methods that astronomers use to identify the presence of a planet around a star. They look at the light coming from the star, to see if some of the light is blocked as the planet passes in front of its host star on the line of sight to Earth — transits the star, as astronomers say. As the planet orbits around its star, we expect to see regular small dips in the light coming from the star as the planet moves in front of it.

[3] SPECULOOS is mostly funded by the European Research Council and led also by the University of Liège. Four 1-metre robotic telescopes will be installed at the Paranal Observatory to search for habitable planets around 500 ultra-cool stars over the next five years.

News Story Origin and Copyright: ESO
Click here for the original news release.
'The mathematician's patterns, like the painter's or the poets, must be beautiful; the ideas, like the colours or the words, must fit together in a harmonious way. Beauty is the first test: there is no permanent place in the world for ugly mathematics.'