From 9/11 to Now: Lessons from the Tragedy 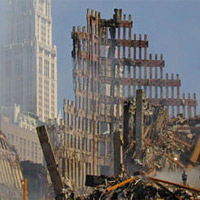 The Woolworth Building in New York City is visible behind the rubble of the collapsed World Trade Center. The image was taken one week after the Sept. 11 terrorist attacks.

When the 9/11 attacks occurred, people across the nation responded by asking how they could help and so did scientists and engineers, who had various types of expertise.

Within days of the attacks, National Science Foundation- (NSF) supported rapid-response researchers were on site to not only gather information, but in some situations, to assist. By the end of the following year, nearly 150 NSF-supported research teams were learning from, and applying the lessons of, homeland-security science and engineering projects.

As the tenth anniversary of the 9/11 attacks approaches, NSF asked several of the scientists and engineers whose research was impacted by the tragedy--including many who were on the ground in the immediate aftermath--to share how their findings have helped secure the nation in the decade since.

Mansoor Moaddel, Professor of Sociology at Eastern Michigan University and Research Affiliate of the Population Studies Center at the University of Michigan, is a world-renowned expert on public sentiments in the Middle East. In his interview, he describes his research to understand how populations in the Middle East responded not only to 9/11, but also to U.S. involvement in Iraq and the broader cultural shifts underway in the region. A more complete discussion is available in his full interview and in a description of his initial work following 9/11. You can read more about the views of Egyptians and Moroccans to 9/11 in this paper.

Sheldon Jacobson of the Department of Computer Science at the University of Illinois at Urbana-Champaign is an expert in operations research, and while his efforts have stretched from vaccine stockpiling to statistics, his studies on security continue to influence policy and practice, including screening activities at airports. In a recent issue of IIE Transactions, Jacobson is co-author on a paper that looks at how comprehensive airport screening may actually be less effective than more targeted screening approaches. For more on that research and his work over the last decade, see his full interview with NSF.

James Kendra, director of the Disaster Research Center at the University of Delaware, and Tricia Wachtendorf, the center's associate director, were both present in New York City in the days following 9/11. In partnership with colleagues from the Center, Kendra and Wachtendorf learned valuable lessons as they observed activities at Ground Zero and at response facilities. What they learned about improvised solutions for that continually evolving situation has wide-reaching implications for disaster management. Hear both researchers describe their work during and after the 9/11 attacks in their full interview with NSF.

Robin Murphy, director of the Center for Robot-Assisted Search and Rescue at Texas A&M University, was on-site at Ground Zero within 24 hours of the attack. She brought along a team of students and colleagues to deploy a cadre of robots to search the rubble for survivors and victims. The effort was a foundational moment in the development of her rescue robotics systems and was a precursor to her later efforts following Hurricane Katrina, the 2011 Japanese earthquake, and other disasters. See her interview for more details on her work.

News Story Origin and Copyright: NSF
Click here for the original news release.
'The mathematician's patterns, like the painter's or the poets, must be beautiful; the ideas, like the colours or the words, must fit together in a harmonious way. Beauty is the first test: there is no permanent place in the world for ugly mathematics.'