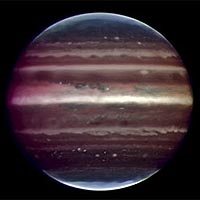 A 2008 image of Jupiter obtained by the Very Large Telescope in Chile shows a shift in high-level atmospheric haze compared with a 2005 image taken by the Hubble Space Telescope. The brightest haze has shifted southward by about 6,000 kilometers, probably in response to a global upheaval that began two years ago. The false color, infrared VLT image combines a series of images taken over 20 minutes on Aug. 17 by a Multi- Conjugate Adaptive Optics Demonstrator (MAD) prototype mounted on the telescope. The image sharpening corresponds to seeing details about 300 kilometers wide on the surface of the planet.

A two-hour observation of Jupiter using an improved technique to remove atmospheric blur has produced the sharpest whole-planet picture ever taken from the ground, according to astronomers from the University of California, Berkeley, and the European Southern Observatory (ESO).

The series of 265 snapshots taken with the help of a prototype Multi-Conjugate Adaptive Optics (MCAO) instrument mounted on the ESO's Very Large Telescope (VLT) revealed changes over the past three years in Jupiter's smog-like haze, probably a response to a planet-wide upheaval more than a year ago.The images prove the value of multi-conjugate systems, which use two or more guide stars instead of one as references to sense the atmospheric turbulence in the instrument's field of view, and two or more deformable mirrors to correct for it. The multiple-star technique produces sharp images over a wider area of sky - an area about three times larger than that produced by single-star adaptive optics systems employed on large telescopes such as Keck II and Gemini North in Hawaii.

'This type of adaptive optics has a big advantage for looking at large objects, such as planets, star clusters or nebulae,' said lead researcher Franck Marchis, a research astronomer at UC Berkeley and the SETI Institute in Mountain View, Calif. 'While regular adaptive optics systems provide excellent correction in a small field of view, MCAO provides good correction over a larger area of sky.'

A full MCAO instrument is due to be installed on Gemini North by 2010 and is proposed for the VLT.

This allowed the researchers to observe Jupiter for almost two hours on Aug. 16 and 17, 2008, a record duration, according to the observing team. Conventional adaptive optics systems using a single reference moon cannot monitor Jupiter that long because the moon moves too far from the planet. The Hubble Space Telescope cannot observe Jupiter continuously for more than about 50 minutes, because it is regularly blocked by the Earth during Hubble's 96-minute orbit.

Using the MCAO Demonstrator (MAD) mounted on the Melipal 8.2-meter telescope of the VLT, ESO astronomer Paola Amico, MAD project manager Enrico Marchetti and MAD integration engineer Sebastien Tordo tracked two moons, Europa and Io, one on each side of Jupiter, to provide a good correction across the full disk of the planet.

'It has been the most challenging observation we performed with MAD because we had to track with high accuracy the two moons having different absolute velocities while simultaneously chasing Jupiter, which was moving with respect to them,' said Marchetti.

The VLT image had a resolution of 90 milliarcseconds, 'twice the resolution of the Hubble Space Telescope,' said Marchis. The improved resolution is due not only to MCAO but also the much larger aperture of the 8.2-meter VLT. 'Ground-based telescopes are getting comparable to or better than Hubble in the near-infrared, even for extended objects like Jupiter,' he said.

'We wanted to check if there is a link between South Equatorial Belt outbreaks and the Great Red Spot's turbulent wake,' explained team member Mike Wong, a UC Berkeley research astronomer. The belt is some 18,000 kilometers wide north-to-south, and it encircles Jupiter just above the track of the Great Red Spot.

Instead, the team found a major alteration in the brightness of the equatorial haze, which lies in a 16,000-kilometer wide belt over Jupiter's equator. They measured increased sunlight reflecting off upper atmospheric haze, which means either that the amount of haze has increased or that it has moved up to higher altitudes. The brightest portion had shifted south by more than 6,000 kilometers, Wong said.

This conclusion came from a comparison with images taken in 2005 by Wong and UC Berkeley astronomer Imke de Pater using the Hubble Space Telescope's Near Infrared Camera and Multi-Object Spectrometer (NICMOS) instrument. The Hubble images, taken at infrared wavelengths very close to those used for the VLT study, show more haze in the northern half of the bright Equatorial Zone, while the 2008 VLT images show a clear shift to the south.

The haze, which could be the nitrogen compound hydrazine - used on Earth as a rocket propellant - or possibly frozen crystals of ammonia, water or ammonium hydrosulfide from deeper in the gaseous planet, is very prominent in infrared images. Because visible light can penetrate to deeper levels than infrared light, optical telescopes see light reflected from deeper, thicker clouds lying beneath the haze.

The haze behaves somewhat like particles in the tops of thunderheads (known as cumulonimbus anvils) on Earth or in the ash plumes from large volcanic eruptions, which rise into the upper atmosphere and spread around the world, Wong said. On Jupiter, ammonia injected into the upper atmosphere interacts with sunlight to form hydrazine, which condenses into a mist of fine ice particles. The hydrazine chemistry in Jupiter's atmosphere is similar to that occurring in the Earth's atmosphere after a volcanic eruption, when sulfur dioxide is converted by solar ultraviolet light into sulfuric acid.

'The change we see in the haze could be related to big changes in cloud patterns associated with last year's upheaval, but we need to look at more data to narrow down precisely when the changes occurred,' Wong said.