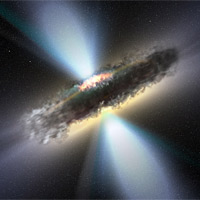 This illustration shows the thick dust torus that astronomers believe surrounds supermassive black holes and their accretion discs. When the torus is seen edge-on’ as in this case, much of the light emitted by the accretion disc is blocked. However, the sharp X-ray and gamma-ray eyes of INTEGRAL can peer through the thick dust and locate 'hidden' black holes. INTEGRAL's survey of the local universe searched for hidden black holes but found few, which implies these kinds of black holes are largely in the more distant (earlier) universe.

Black holes are objects in space that are so massive and compact they were described by Einstein as “bending” space. Conventional thinking asserts that black holes swallow everything that gets too close and that nothing can escape, but the study by Professor Samuel Braunstein and Dr Manas Patra suggests that information could escape from black holes after all.

The implications could be revolutionary, suggesting that gravity may not be a fundamental force of Nature.

Professor Braunstein says: “Our results didn’t need the details of a black hole’s curved space geometry. That lends support to recent proposals that space, time and even gravity itself may be emergent properties within a deeper theory. Our work subtly changes those proposals, by identifying quantum information theory as the likely candidate for the source of an emergent theory of gravity.”

But quantum mechanics is the theory of light and atoms, and many physicists are sceptical that it could be used to explain the slow evaporation of black holes without incorporating the effects of gravity.

The research, which appears in the latest issue of Physical Review Letters, uses the basic tenets of quantum mechanics to give a new description of information leaking from a black hole.

Professor Braunstein says: “Our results actually extend the predictions made by well-established techniques that rely on a detailed knowledge of space time and black hole geometry.”

Dr Patra adds: “We cannot claim to have proven that escape from a black hole is truly possible, but that is the most straight-forward interpretation of our results. Indeed, our results suggest that quantum information theory will play a key role in a future theory combining quantum mechanics and gravity.”