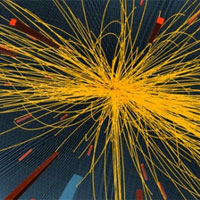 Proton-proton collisions at the Large Hadron Collider produce hundreds of particles. Some of those particles form pairs that display an unexpected correlation.
Image: CERN

Since December, the Large Hadron Collider (LHC) has been smashing particles together at record-setting energy levels. Physicists hope that those high-energy collisions could replicate the conditions seen immediately after the Big Bang, shedding light on how our universe came to be. Now, data from collisions that took place in July suggests that the LHC may have have taken a step toward that goal.

The finding, which has been submitted to the Journal of High Energy Physics, comes from proton-proton collisions that occurred in the LHC in July, each of which produced 100 or more charged particles. One of the two large, general-purpose detectors at LHC, the Compact Muon Solenoid (CMS) experiment, measured the path that each of these particles took after the collision.

The CMS physicists observed a surprising new phenomenon in some pairs of those particles: They appeared to be associated together at the point of collision. That is, when some pairs of particles fly away from each other after the collision, their respective directions appear to be correlated. Such correlations between particles that move away from each other at near the speed of light had not been seen before in collisions of protons.

“As soon as the measurement came out — first within the experiment and then presented publicly — there was a lot of debate about the possible explanation,” says Gunther Roland, a physicist in the MIT heavy-ion group who was one of the leaders of the analysis of the data along with MIT postdoctoral associate Wei Li.

Some of the proposed explanations are based on subtle effects in the scattering of the quarks that make up the colliding protons, which may not be described by current models of these interactions. Others assume that the effect is the result of the high density of particles in the early stages of the collision, says Roland, an associate professor of physics at MIT.

At the Relativistic Heavy Ion Collider at Brookhaven National Laboratory, physicists have observed similar phenomena following collisions of heavier particles such as copper and gold ions. One explanation for the observation at Brookhaven is that the quarks and gluons were forced together at such high densities that they were freed, becoming quark-gluon plasma — the hot soup of elementary particles that existed for a few millionths of a second after the Big Bang and that subsequently cooled and formed protons and neutrons, the building blocks of matter.

In the upcoming months, physicists plan to increase the intensity of LHC proton beams, providing at least 100 times more data that can be used to further study this phenomenon. They also plan to run beams of heavier ions, such as lead. Based on these studies, it will be possible to eliminate many of the proposed explanations and to study if the effects in proton-proton and heavy ion collisions are related.