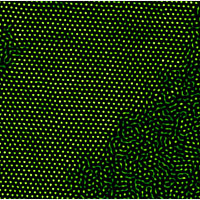 Fluorescently labeled microscopic beads can simulate melting, as shown by this superposition of several frames of video. With more than four layers of beads, the melting shows 'rivers' of liquid forming within crystalline regions, whereas no such coexistence exists when there are fewer than five layers.

Physicists from the University of Pennsylvania and Hong Kong University of Science and Technology have reported an elegant experimental study of the melting behaviors of thin crystalline films, uncovering a variety of interesting differences between thick films of greater than four layers and thinner or single-layer films.

Put simply, thin crystalline films melt differently depending on thickness. The scientists made crystalline films from closely packed micron size gel beads. Small changes in temperature caused the beads to change size and the films to melt. The findings, published in the current edition of Physical Review Letters, are relevant to technologies that require thin film adhesion as well as lubrication technologies.

Video of the displacement of the surface layer of these materials at the melting point of 28 degrees Celsius is available at http://focus.aps.org/files/focus/v25/st18/3layertraj.mov.

Among many observations, very thin solid films were found to abruptly melt into the liquid phase while thicker films behaved more like conventional solids exhibiting traditional liquid-solid coexistence. A critical thickness of four layers marked the crossover from one behavior to the other.

“The melting behavior of thin solid films presents interesting new questions and challenges for both theory and experiment,' Han said, 'because melting behaviors are not quite bulk like and are also different from what we know about two-dimensional systems.'

'To date,” Yodh said, “only a few experiments in atomic and molecular thin films have critically explored these issues because it is difficult to visualize and track the atoms. Colloidal microgel particle films, on the other hand, offer a new experimental means to examine these basic questions.'

“Scientists have studied melting for a long time,” said Thomas Rieker, program director at the National Science Foundation. “This experiment links everyday experience with the melting of materials such as ice, the coexistence of liquid and solid phases, with the predictions in the 1970s of Kosterlitz, Thouless, Halpern, Nelson of how a monolayer of atoms on a surface melts. What is really interesting is how short range the effects of a surface are.”

The study was conducted by Han, Y. Peng and Z. Wang of Hong Kong University of Science and Technology, Yodh from the Department of Physics and Astronomy and A. M. Alsayed from the Penn physics and astronomy department and Rhodia Inc.

The work was supported by funding from the Research Grants Council of Hong Kong, the National Science Foundation, the NSF Materials Research Science and Engineering Center at Penn, the National Aeronautics and Space Administration and Rhodia.