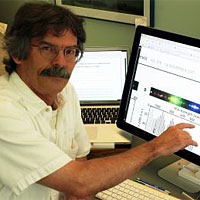 University of Oregon scientists have invented a method to change the color of single photons in a fiber optic cable. The laser-tweaked feat could be a quantum step forward for transferring and receiving high volumes of secured data for future generations of the Internet.

The proof-of-concept experiment is reported in a paper about work led by UO physicist Michael G. Raymer that appeared in the Aug. 27 issue of Physical Review Letters.

In a separate paper also published by the same journal on Sep. 15, Raymer and collaborators at the University of Bath in the United Kingdom tell how they added hydrogen and a short laser burst to a hollow 'photonic crystal' fiber cable to create multiple colors, or wavelengths, of light. This paper, Raymer said, provides groundwork for future research in creating ultra-short light pulses.

The single-photon project, in which a dual-color burst of laser light was used to change the color of a separate single photon of light, is directly applicable to future Internet communications technology, said Raymer, the UO's Knight Professor of Liberal Arts and Sciences and author of a newly published textbook 'The Silicon Web: The Physics Behind the Internet.'

In the computing world, digital data now is contained as individual bits represented by many electrons and is transmitted using pulses of infrared light containing many photons. In quantum computing – a futuristic technology – data might be stored in individual electrons and photons. Such quantum techniques could make data 100-percent secure from hackers and expand the ability to search large databases, Raymer said.

'There is a need for more bandwidth, or data rate, in fiber optic networks,' he said. 'In today's fiber optic lines one frequency of light may carry a phone conversation, while others may carry TV channels or emails, all traveling in separate channels across the Internet. At the level of single photons, we would like to send data in different channels – colors or wavelengths – at the same time. Quantum memories based on electrons emit and absorb visible light – for example, red,' he said. 'But the optical fibers we want to use – such as those in the ground now – are optimized to transmit infrared, not visible light.'

In experiments led by Raymer's doctoral student Hayden J. McGuinness, researchers used two lasers to create an intense burst of dual-color light, which when focused into the same optical fiber carrying a single photon of a distinct color causes that photon to change to a new color. This occurs through a process known as Bragg scattering, whereby a small amount of energy is exchanged between the laser light and the single photon, causing its color to change.

This process, demonstrated in the UO’s Oregon Center for Optics, is called quantum frequency translation. It allows devices that talk to one another using a given color of light to communicate with devices that use a different color.

The research was stimulated by work done earlier by Raymer’s collaborators: Colin McKinstrie at Alcatel-Lucent Bell Labs and Stojan Radic at the University of California, San Diego.

'Other researchers have done this frequency translation using certain types of crystals,' Raymer said. 'Using optical fibers instead creates the translated photons already having the proper shape that allows them to be transmitted in a communication fiber. Another big advantage of our technique is that it allows us to change the frequency of a single photon by any chosen amount. The objective is to convert a single photon from the color that a common quantum memory will deal with into an infrared photon that communication fibers can transmit. At the other end, it has to be converted back into the original color to go into the receiving memory to be read properly.'

The second paper published by Raymer’s group focused on theoretical and experimental work at UO and at the University of Bath. It showed how to create an optical frequency comb in a hydrogen-filled optical fiber.

The comb method was co-developed by John Hall of the National Institute of Standards and Technology, who won the Nobel Prize in Physics in 2005 for his work that led to the standard for measuring light frequencies.

By filling empty air holes in a hollow optical with hydrogen gas, researchers were able to change the color, or frequency, of light passing through. As a short burst of red laser passed through the gas, the hydrogen molecules were caused to vibrate, emitting strong light of many colors.

'In the first study, we worked with one photon at a time with two laser bursts to change the energy and color without using hydrogen molecules,' he said. 'In the second study, we took advantage of vibrating molecules inside the fiber interacting with different light beams. This is a way of using one strong laser of a particular color and producing many colors, from blue to green to yellow to red to infrared.'

Such time scales could open the way to study biological processes at the level of atoms or possibly capture so-far-unseen activity in photosynthesis, Raymer said.

Co-authors with McGuinness and Raymer on the single-photon paper were McKinstrie and Radic. The National Science Foundation funded the project.

For the optical comb work, Raymer teamed with UO student doctoral Chunbai Wu and Y.Y. Wang, F. Couny and Fetah Benabid, all of the University of Bath. The NSF and the UK's Engineering and Physical Sciences Research Council supported the research through grants to Raymer and Benabid, respectively.