Magnetism Common to All Cosmic Jets 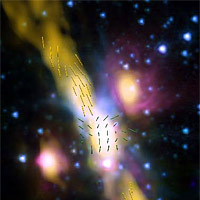 Radio jets emitted by young star shown in yellow
on background of infrared image from Spitzer
Space Telescope. Yellow bars show orientation of
magnetic field in jet as measured by VLA. Green bars
show magnetic-field orientation in the dusty envelope
surrounding the young star. Two other young stars are
seen at sides of the jet.

Astronomers have found the first evidence of a magnetic field in a jet of material ejected from a young star, a discovery that points toward future breakthroughs in understanding the nature of all types of cosmic jets and of the role of magnetic fields in star formation.

Throughout the Universe, jets of subatomic particles are ejected by three phenomena: the supermassive black holes at the cores of galaxies, smaller black holes or neutron stars consuming material from companion stars, and young stars still in the process of gathering mass from their surroundings. Previously, magnetic fields were detected in the jets of the first two, but until now, magnetic fields had not been confirmed in the jets from young stars.

'Our discovery gives a strong hint that all three types of jets originate through a common process,' said Carlos Carrasco-Gonzalez, of the Astrophysical Institute of Andalucia Spanish National Research Council (IAA-CSIC) and the National Autonomous University of Mexico (UNAM).
The astronomers used the National Science Foundation's Very Large Array (VLA) radio telescope to study a young star some 5,500 light-years from Earth, called IRAS 18162-2048. This star, possibly as massive as 10 Suns, is ejecting a jet 17 light-years long.

Observing this object for 12 hours with the VLA, the scientists found that radio waves from the jet have a characteristic indicating they arose when fast-moving electrons interacted with magnetic fields. This characteristic, called polarization, gives a preferential alignment to the electric and magnetic fields of the radio waves.

'We see for the first time that a jet from a young star shares this common characteristic with the other types of cosmic jets,' said Luis Rodriguez, of UNAM.

The discovery, the astronomers say, may allow them to gain an improved understanding of the physics of the jets as well as of the role magnetic fields play in forming new stars. The jets from young stars, unlike the other types, emit radiation that provides information on the temperatures, speeds, and densities within the jets. This information, combined with the data on magnetic fields, can improve scientists' understanding of how such jets work.

'In the future, combining several types of observations could give us an overall picture of how magnetic fields affect the young star and all its surroundings. This would be a big advance in understanding the process of star formation,' Rodriguez said.