Dark Matter Inside Our Sun? 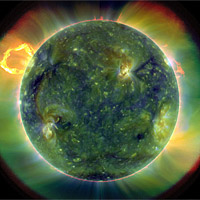 A scientist at Royal Holloway, University of London believes dark matter is lurking at the centre of the sun and cooling down its core temperature.

The latest study, led by Dr Stephen West from the Department of Physics at Royal Holloway, looks at the possible effects of dark matter on the properties of the sun, if these elusive particles become trapped at its centre.

“Dark matter makes up more than 80 per cent of the total mass of the universe. We know that dark matter exists but to date it has never been produced in a laboratory or directly observed in any experiment, as a result we have very little information about what it actually is. It is important that we examine all possible ways of probing the nature of dark matter and the sun could provide us with an unexpected laboratory in which to do this,” says Dr West.

Dark matter is expected to form a halo around our galaxy and since the sun is in motion around the galaxy it experiences a dark matter 'wind' as it moves through this halo. Some of the dark matter particles may collide with the elements in the sun and become gravitationally captured by the sun. This could lead to a build up of dark matter particles at the centre of the sun.

The research team’s simulations show that the effect of this build up is to reduce the temperature of the solar core. The dark matter particles can absorb heat at the core and transfer it out towards the surface, decreasing the temperature of the core. This change in temperature affects the number of neutrinos produced as by-products in nuclear reactions within the sun and it is hoped that by examining these neutrinos we can gain information about the sun's core temperature and whether dark matter plays an important role in solar physics. This in turn could provide information about the mass of individual dark matter particles and how they interact with the elements in the sun.

Dr West adds, “The next step in the work is to look more closely at the change in the predicted number of neutrinos produced in the sun as a result of dark matter collecting at the core and to examine the sensitivity of existing neutrino experiments to this change. In addition, an investigation of the possibility of probing this type of dark matter at the Large Hadron Collider is planned. The LHC could provide complimentary information about the properties of dark matter which along with the information from the sun may lead to a clearer picture of one of the more puzzling issues in physics.”