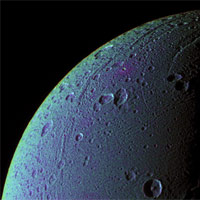 This view highlights tectonic faults and craters on Dione, an icy world that has undoubtedly experienced geologic activity since its formation.

To create the enhanced-color view, ultraviolet, green and infrared images were combined into a single black and white picture that isolates and maps regional color differences. This 'color map' was then superposed over a clear-filter image. The origin of the color differences is not yet understood, but may be caused by subtle differences in the surface composition or the sizes of grains making up the icy soil.

This view looks toward the leading hemisphere on Dione (1,126 kilometers, or 700 miles across). North is up and rotated 20 degrees to the right.

NASA's Cassini spacecraft has 'sniffed' molecular oxygen ions around Saturn's icy moon Dione for the first time, confirming the presence of a very tenuous atmosphere. The oxygen ions are quite sparse - one for every 0.67 cubic inches of space (one for every 11 cubic centimeters of space) or about 2,550 per cubic foot (90,000 per cubic meter) - show that Dione has an extremely thin neutral atmosphere.

At the Dione surface, this atmosphere would only be as dense as Earth's atmosphere 300 miles (480 kilometers) above the surface. The detection of this faint atmosphere, known as an exosphere, is described in a recent issue of the journal Geophysical Research Letters.

'We now know that Dione, in addition to Saturn's rings and the moon Rhea, is a source of oxygen molecules,' said Robert Tokar, a Cassini team member based at Los Alamos National Laboratory, Los Alamos, N.M., and the lead author of the paper. 'This shows that molecular oxygen is actually common in the Saturn system and reinforces that it can come from a process that doesn't involve life.'

Dione's oxygen appears to derive from either solar photons or energetic particles from space bombarding the moon's water ice surface and liberating oxygen molecules, Tokar said. But scientists will be looking for other processes, including geological ones, that could also explain the oxygen.

'Scientists weren't even sure Dione would be big enough to hang on to an exosphere, but this new research shows that Dione is even more interesting than we previously thought,' said Amanda Hendrix, Cassini deputy project scientist at NASA's Jet Propulsion Laboratory, Pasadena, Calif., who was not directly involved in the study. 'Scientists are now digging through Cassini data on Dione to look at this moon in more detail.'

Several solid solar system bodies - including Earth, Venus, Mars and Saturn's largest moon Titan - have atmospheres. But they tend to be typically much denser than what has been found around Dione. However, Cassini scientists did detect a thin exosphere around Saturn's moon Rhea in 2010, very similar to Dione. The density of oxygen at the surfaces of Dione and Rhea is around 5 trillion times less dense than that at Earth's surface.

Tokar said scientists suspected molecular oxygen would exist at Dione because NASA's Hubble Space Telescope detected ozone. But they didn't know for sure until Cassini was able to measure ionized molecular oxygen on its second flyby of Dione on April 7, 2010 with the Cassini plasma spectrometer. On that flyby, the spacecraft flew within about 313 miles (503 kilometers) of the moon's surface.

The Cassini-Huygens mission is a cooperative project of NASA, the European Space Agency, and the Italian Space Agency. NASA's Jet Propulsion Laboratory, Pasadena, Calif., a division of the California Institute of Technology in Pasadena, manages the mission for NASA's Science Mission Directorate, Washington, D.C. The Cassini orbiter was designed, developed and assembled at JPL. The Cassini plasma spectrometer team and the ion and neutral mass spectrometer team are based at Southwest Research Institute, San Antonio.