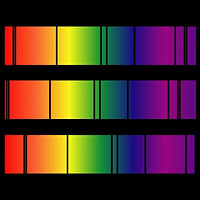 In every star’s outer layer, certain atoms are absorbed by light at different wavelengths, and this absorption appears as dark lines in the different colors of the star’s spectrum. Researchers use these lines as convenient markers to measure the size of the Doppler shift over time. For a so-called “red shift,” the lines move toward the red end of the spectrum (as displayed in the middle row in this graphic), and for a blue shift, the lines move toward the blue end (as displayed in the bottom row in this graphic).

Many students learn about the Doppler effect in physics class, typically as part of a discussion of why the pitch of a siren is higher as an ambulance approaches and then lower as the ambulance passes by. The effect is useful in a variety of different scientific disciplines, including planetary science: Astronomers rely on the Doppler effect to detect planets outside of our solar system, or exoplanets. To date, 442 of the 473 known exoplanets have been detected using the Doppler effect, which also helps planetary scientists glean details about the newly found planets.

In astronomy, that source can be a star that emits electromagnetic waves; from our vantage point, Doppler shifts occur as the star orbits around its own center of mass and moves toward or away from Earth. These wavelength shifts can be seen in the form of subtle changes in its spectrum, the rainbow of colors emitted in light. When a star moves toward us, its wavelengths get compressed, and its spectrum becomes slightly bluer. When the star moves away from us, its spectrum looks slightly redder.

To observe the so-called red shifts and blue shifts over time, planetary scientists use a high-resolution prism-like instrument known as a spectrograph that separates incoming light waves into different colors. In the outer layer of every star, certain atoms are absorbed by light at different wavelengths, and this absorption appears as dark lines in the different colors of the star’s spectrum. Researchers use the shifts in these lines as convenient markers by which to measure the size of the Doppler shift.

If the star exists by itself — that is, if there is no exoplanet or companion star in its stellar system — then there will be no change in the pattern of its Doppler shifts over time. But if there is a planet or companion star in the system, the gravitational pull of this unseen body or star will perturb the host star’s movement at certain parts of its orbit, producing a noticeable change in the overall pattern and size of Doppler shifts over time. In other words, the pattern of a star’s Doppler shifts can change over time as a result of gravity affecting the star’s motion. “If this shift is large, then it must be caused by another star pulling it, but if this shift is small, then it is likely caused by a low-mass body like an exoplanet,” explains Joshua Winn, an assistant professor in MIT’s Department of Physics. As part of his work at MIT’s Kavli Institute for Astrophysics and Space Research, Winn studies the relationship between an exoplanet’s orbit and its parent star’s rotation for clues about how the planet may have formed.

How a planet’s Doppler shift changes over time can also shed light on the planet’s orbital period (the length of its “year”), the shape of its orbit and its minimum possible mass. Recently, Kavli postdoc Simon Albrecht used the Doppler effect to detect color shifts in the light absorbed by an exoplanet, which indicated strong winds in the planet’s atmosphere.

Doppler shifts are used in many fields besides astronomy. By sending radar beams into the atmosphere and studying the changes in the wavelengths of the beams that come back, meteorologists use the Doppler effect to detect water in the atmosphere. The Doppler phenomenon is also used in healthcare with echocardiograms that send ultrasound beams through a body to measure changes in blood flow to make sure that a heart valve is working properly or to diagnose vascular diseases. Police also rely on the Doppler effect when they use a radar gun to bounce radio beams off of your car; the change in frequency between the directed and reflected beams provides a measure of your car’s speed.