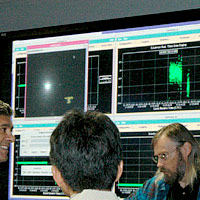 EPOXI navigation team members and engineers were in mission control for the final flight-path maneuver before the spacecraft's planned Nov. 4 flyby of comet Hartley 2.

The EPOXI mission spacecraft has refined its path toward a Nov. 4 flyby of comet Hartley 2, successfully performing its final maneuver today at 8 a.m. PDT (11 a.m. EDT). The spacecraft burned its engines for 6.8 seconds, changing the spacecraft's velocity by 1.4 meters per second (3 miles per hour).

'I've worked the Stardust flyby of comet Wild 2 and the Deep Impact encounter with comet Tempel 1, and I have never seen a comet flit around the sky like this one,' said mission navigator Shyam Bhaskaran of NASA's Jet Propulsion Laboratory in Pasadena, Calif. 'We needed to make this burn to re-locate the spacecraft for the 700-kilometer [about 435 miles] flyby distance.'

Part of the reason Hartley 2 is hard to pin down is because the small comet is very active.

'Hartley 2 is one-seventh the size of comet Tempel 1, but it releases almost the same amount of material into the space environment,' said EPOXI Principal Investigator Mike A'Hearn of the University of Maryland. 'These jets can act as thrusters and actually make small changes to the comet's orbit around the sun.'

On Thursday, Nov. 4, the spacecraft will fly past the comet, with closest approach expected about 7 a.m. PDT [10 a.m. EDT]. This flyby will mark the fifth time in history that a spacecraft has been close enough to image the heart of the comet, more commonly known as the nucleus.

EPOXI is an extended mission that uses the already 'in-flight' Deep Impact spacecraft to explore distinct celestial targets of opportunity. The name EPOXI itself is a combination of the names for the two extended mission components: the extrasolar planet observations, called Extrasolar Planet Observations and Characterization (EPOCh), and the flyby of comet Hartley 2, called the Deep Impact Extended Investigation (DIXI). The spacecraft will continue to be referred to as 'Deep Impact.'

JPL, a division of the California Institute of Technology in Pasadena, manages the EPOXI mission for NASA's Science Mission Directorate, Washington. The University of Maryland, College Park, is home to the mission's principal investigator, Michael A'Hearn. Drake Deming of NASA's Goddard Space Flight Center, Greenbelt, Md., is the science lead for the mission's extrasolar planet observations. The spacecraft was built for NASA by Ball Aerospace & Technologies Corp., Boulder, Colo.