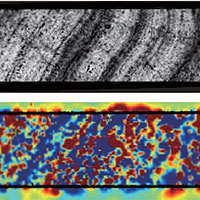 A slice of ferromanganese crust from the Pacific Ocean was analyzed using a SQUID microscope at Vanderbilt University. The top image shows a portion of the image of the slice taken with an electron microprobe. The second image shows the magnetized regions in the slice, with red areas showing one direction of magnetization and blue the opposite direction.

In order to date environmental events from Earth's history — such as meteorite impacts or climate change — geologists have long studied variations in slow-growing seafloor sedimentary rocks called ferromanganese crusts that build up in layers over the eons. The layers can be dated by various means, such as by analyzing radioactive isotopes, but those methods don't provide accurate dating on small scales: a millimeter of rock, for example, can include information that spans as much as hundreds of thousands of years.

Now, a new technique pioneered by researchers at MIT, Vanderbilt University and in Japan provides a reliable way to date these “archives” of environmental changes with much finer precision.

Because the Earth’s magnetic field flips to an opposite (north or south) orientation at random intervals, the layers of rock — which record the magnetic orientation at the time they formed — produce a kind of natural barcode that can be used for dating past geological changes. While the layers' scales differ greatly — in one formation, a given band may be kilometers thick, while in another it spans less than a millimeter — the relative thicknesses (one band twice as thick as the next, and so on) are the same. The spacing of these bands has been determined by studying the rapidly growing igneous rocks that form in midocean ridges where the Earth’s crust grows rapidly, so the stripes there are broad and easy to measure and date.

“This new instrument allows paleomagnetism [the study of ancient magnetic fields] to be brought down to the microscale,” says Benjamin Weiss, associate professor of planetary sciences in MIT’s Department of Earth, Atmospheric and Planetary Sciences. Weiss is a co-author of a paper describing the use of this new instrument that appears in the March issue of the journal Geology.

Weiss and his co-authors, from the Geological Survey of Japan, Kochi University in Japan and Vanderbilt University in Tennessee, tested sedimentary ferromanganese crusts with the new technique, called scanning SQUID (superconducting quantum interference device) microscopy which has been developed at Vanderbilt and MIT over the last decade. The rock samples, which were collected in the northwest Pacific in 1996, were built up on the seafloor at the very slow rate of 5 millimeters (one-fifth of an inch) per million years, according to various independent dating measurements. By comparing the dates the new instrument derived with those obtained from conventional isotope ratio techniques, they were able to prove the accuracy of the new method.

“Normally, paleomagnetists collect hundreds of oriented rock cores and spend months analyzing them in order to compile histories of magnetic reversals throughout time,” says Joshua Feinberg, assistant professor of geology and geophysics at the University of Minnesota. “The ability to do this on a single 5-centimeter-long sample is impressive, and provides researchers with a well-calibrated tool for dating” seafloor rock samples. Thanks to the work of the researchers in Japan and at MIT, he says, “many of us in the paleomagnetic community are eager to use scanning SQUID instruments in our own research … Our imaginations are the only limitation on how useful this method will ultimately be.”

The new technology could be especially useful, Weiss explains, because methods of studying changes in ocean circulation and other parameters, such as ice core sampling, only go back a few hundred thousand years, but the new magnetic measurements can be used to date materials going back many millions of years. Such measurements could be used, for example, to find out how ocean circulation has changed with time, Weiss says — which could help in understanding the potential impact of changes in circulation patterns that might result from global climate change.

The technique can also be used to date ancient astronomical phenomena, such as the rate of impacts of meteorites on Earth. Such impacts may lead to deposition in terrestrial sediments of a short-lived isotope of iron, called 60Fe; evidence for this isotope in ancient sedimentary layers suggests the possibility of an enhanced rate of micrometeorites several million years ago. “It’s not easy to date sedimentary rocks,” Weiss says, so this new instrument could theoretically be used to date “anything that’s happened” that leaves traces in these seafloor crusts.