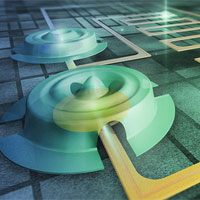 An illustration of the 15-micrometre-wide drumheads prepared on silicon chips used in the experiment. The drumheads vibrate at a high ultrasound frequency, and the peculiar quantum state predicted by Einstein was created from the vibrations. Image: Aalto University / Petja Hyttinen & Olli Hanhirova, ARKH Architects.

The elusive quantum mechanical phenomenon called entanglement has now been made a reality in objects almost macroscopic in size. Results published in Nature show how two vibrating drumheads, the width of a human hair, can display the spooky action.

In 1935, Einstein observed that quantum mechanics, the then recently developed fundamental theory of nature, implies the existence of a “spooky action at a distance”, which soon became known as “entanglement”. It allows objects to affect each other across arbitrary distances without any direct interaction. The phenomenon defies both classical physics and our common-sense understanding of reality.

Nowadays, entanglement is considered a cornerstone of quantum mechanics, and has previously been vindicated in experiments with microscopic systems such as light or atoms. Entanglement is also the key resource for a host of potentially transformative quantum technologies, such as quantum computation and information transmission, in the decades to come.

Quantum entanglement is, however, extremely fragile, and it will disappear if the entangled particles interact with their surroundings, through thermal disturbances, for example. For long it was considered nonsensical that entanglement could occur between objects larger than atoms or molecules.

A team led by Professor Mika Sillanpää at Aalto University Department of Applied Physics have now proved otherwise. Their results have been published in Nature, the most esteemed scientific journal in the world.

In their laboratory measurements, the researchers managed to bring two distinct and moving objects, nearly visible to the naked eye, into an entangled quantum state where they feel each other through the “spooky action” with which Einstein was famously uncomfortable . The objects in the experiments were two vibrating drumheads fabricated from metallic aluminium on a silicon chip. The drumheads are truly massive and macroscopic compared to the atomic scale: their diameter is similar to the width of a thin human hair.

‘The vibrating bodies are made to interact via a superconducting microwave circuit. The electromagnetic fields in the circuit carry away any thermal disturbances, leaving behind only the quantum mechanical vibrations’, says Professor Sillanpää, describing the experimental setup.

Eliminating all forms of external noise is crucial for the experiments, which is why they have to be conducted at extremely low temperatures near absolute zero, at –273 °C. Remarkably, the experimental approach allows the unusual state of entanglement to persist for long periods of time, in this case up to half an hour. In comparison, measurements on elementary particles have witnessed entanglement to last only tiny fractions of a second.

‘These measurements are challenging but extremely fascinating. In the future, we will attempt to teleport the mechanical vibrations. In quantum teleportation, properties of physical bodies can be transmitted across arbitrary distances using the channel of “spooky action at a distance”. We are still pretty far from Star Trek, though,’ says Dr. Caspar Ockeloen-Korppi, the lead author on the work, who also performed the measurements.

The results demonstrate that it is now possible to have control over the most delicate properties of objects whose size approaches the scale of our daily lives. The achievement opens doors for new kinds of quantum technologies, where the entangled drumheads could be used as routers or sensors. The finding also enables new studies of fundamental physics in, for example, the poorly understood interplay of gravity and quantum mechanics.

The experimental research was carried out at the OtaNano national research infrastructure for micro- and nanotechnologies in Finland, and was funded also by the European Research Council, the European Union's Horizon 2020 research and innovation programme, and the Academy of Finland.

News Story Origin and Copyright: AALTO
Click here for the original news release.
'The mathematician's patterns, like the painter's or the poets, must be beautiful; the ideas, like the colours or the words, must fit together in a harmonious way. Beauty is the first test: there is no permanent place in the world for ugly mathematics.'