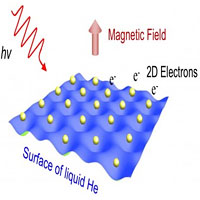 In order to study abnormalities in electron state changes, the scientists applied a strong vertical magnetic field and then bombarded the system with microwave photons. Courtesy of OIST

The end of Moore’s Law — the prediction that transistor density would double every two years — was one of the hottest topics in electronics-related discussions in 2015. Silicon-based technologies have nearly reached the physical limits of the number and size of transistors that can be crammed into one chip, but alternative technologies are still far from mass implementation. The amount of heat generated during operation and the sizes of atoms and molecules in materials used in transistor manufacturing are some of problems that need to be solved for Moore’s Law to make a comeback.

Atomic and molecular sizes cannot be changed, but the heat problem is not unsolvable. Recent research has shown that in two-dimensional systems, including semiconductors, electrical resistance decreases and can reach almost zero when they are subjected to magnetic and microwave influence. Electrical resistance produces a loss of energy in the form of heat; therefore, a decrease in resistance reduces heat generation. There are several different models and explanations for the zero-resistance phenomenon in these systems. However, the scientific community has not reached an agreement on this matter because semiconductors used in electronics are complex and processes in them are difficult to model mathematically.

Research conducted by the Quantum Dynamics Unit at Okinawa Institute of Science and Technology Graduate University (OIST) could represent an important step in understanding two-dimensional semiconductors. The Unit's latest paper, published in Physical Review Letters, describes anomalies in the behaviour of electrons in electrons on liquid helium two-dimensional system.

The system is maintained at a temperature close to absolute zero (-272.75ºC or 0.4K) to keep the helium liquefied. Extraneous electrons are bound to the helium surface because their presence causes slight changes in the orbits of helium electrons, inducing a subtle positive charge at the helium surface. At the same time, free electrons lack the energy required to penetrate the surface to enter the liquid. The resulting system is ideal for studying various electron properties, as it has virtually zero impurities, which avoids artefacts caused by defects of surface and structure, or due to the presence of other chemical elements. Prof. Denis Konstantinov, head of the Quantum Dynamics Unit, and his team study conditions under which electrons can violate selection rules regulating transitions from one state to another.

In a macro-world we perceive transitions from one state to another as happening gradually. For example, a person travelling from town A to town B can make an infinite number of stops. In micro-world that is not always the case. Properties, such as energy, position, speed, and colour, can be quantised, i.e. they can occur only in discrete quantities. In other words, the traveller can be either in town A, or town B, but not somewhere in-between.

Since electron energy is quantised, electrons can occupy only specific energy levels. Quantum theory predicts that in a two-dimensional electron system, where moving electrons are confined to one plane, under a strong magnetic field electrons also will be restricted to climbing only one step of the energy level ladder at a time. However, the experiments show that electrons can jump to higher energy levels, skipping levels between. Prof. Konstantinov and his team are very excited about this discovery: “It is not everyday that we get a chance to observe the violation of quantum theory predictions!”

In order to study abnormalities in electron state changes, the scientists applied a strong vertical magnetic field and then bombarded the system with microwave photons. Under these conditions selection rules seem to stop working. Prof. Konstantinov says that his group had theorised that such a phenomenon is possible and now they have proven it.

Selection rules describe a theoretical, absolutely pure, and homogenous system with no disorders. Real-life systems are more complex. In the case of electrons on helium, the system is pure and homogenous, but the surface of liquid helium is nonetheless disturbed by capillary waves — ripples associated with the surface tension and similar to small, circular ripples in a pond when a pebble is tossed into the water. The height of these ripples is only the diameter of a hydrogen atom, but in combination with microwave radiation they create enough deviation from an ideal system for selection rules to change.

Conditions modelled in the Quantum Dynamics Unit’s experiment are similar to those that led to observations of zero resistance in semiconductors. However, the electrons on helium system is relatively simple and can be described mathematically with great precision. Studying this system will further the development of quantum physics and will contribute to our understanding of electrons and various electrical phenomena. Moreover, with some adjustments models, based on electrons on helium systems can be adapted to more complex systems, such as two-dimensional semiconductors.