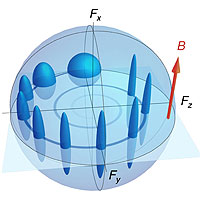 State-of-the-art sensors, such as MRIs and atomic clocks, are capable of making measurements with exquisite precision. MRI is used to image tissues deep within the human body and tells us whether we might suffer from an illness, while atomic clocks are extremely precise timekeepers used for GPS, internet synchronization, and long baseline interferometry in radio-astronomy. One might think these two instruments have nothing in common, but they do: both technologies are based on precise measurement the spin of the atom, the gyroscope-like motion of the electrons and the nucleus. In MRI, for example, the pointing angle of the spin gives information about where in the body the atom is located, while the amount of spin (the amplitude) is used to distinguish different kinds of tissue. Combining these two pieces of information, the MRI can make a 3D map of the tissues in the body.

The sensitivity of this kind of measurement was long thought to be limited by Heisenberg’s uncertainty principle, which states that accurately measuring one property of an atom puts a limit to the precision of measurement you can obtain on another property. For example, if we measure an electron’s position with high precision, Heisenberg’s principle limits the accuracy in the measurement of its momentum. Since most atomic instruments measure two properties (spin amplitude and angle), the principle seems to say that the readings will always contain some quantum uncertainty. This long-standing expectation has now been disproven, however, by ICFO researchers Dr. Giorgio Colangelo, Ferran Martin Ciurana, Lorena C. Bianchet and Dr. Robert J. Sewell, led by ICREA Prof. at ICFO Morgan W. Mitchell. In their article 'Simultaneous tracking of spin angle and amplitude beyond classical limits', published this week in Nature, they describe how a properly designed instrument can almost completely avoid quantum uncertainty.

The trick is to realize that the spin has not one but two pointing angles, one for the north-east-south-west direction, and the other for the elevation above the horizon. The ICFO team showed how to put nearly all of the uncertainty into the angle that is not measured by the instrument. In this way they still obeyed Heisenberg’s requirement for uncertainty, but hid the uncertainty where it can do no harm. As a result, they were able to obtain an angle-amplitude measurement of unprecedented precision, unbothered by quantum uncertainty.

Prof. Mitchell uses a solid analogy to state that “To scientists, the uncertainty principle is very frustrating - we’d like to know everything, but Heisenberg says we can’t. In this case, though, we found a way to know everything that matters to us. It’s like the Rolling Stones song: you can’t always get what you want / but if you try sometimes you just might find / you get what you need.” In their study, the ICFO team cooled down a cloud of atoms to a few micro-degrees Kelvin, applied a magnetic field to produce spin motion as in MRI, and illuminated the cloud with a laser to measure the orientation of the atomic spins. They observed that both the spin angle and uncertainty can be continuously monitored with a sensitivity beyond the previously expected limits, although still obeying the Heisenberg principle.

As for the challenges faced during the experiment, Colangelo comments that 'in the first place, we had to develop a theoretical model to see if what we wanted to do was really possible. Then, not all the technologies we used for the experiment existed when we started: among them, we had to design and develop a particular detector that was fast enough and with very low noise. We also had to improve a lot the way we were 'preparing' the atoms and find a way to efficiently use all the dynamic range we had in the detector. It was a battle against the Dark Side of Quantum, but we won it!'

The results of the study are of paramount importance since this new technique shows that it is possible to obtain even more accurate measurements of atomic spins, opening a new path to the development of far more sensitive instruments and enabling the detection of signals, such as gravitational waves or brain activity, with unprecedented accuracy.