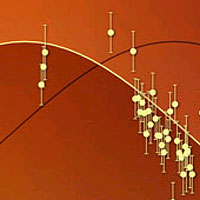 This graph of data from NASA's Spitzer Space Telescope shows how astronomers located a hot spot on a distant gas planet named upsilon Andromedae b -- and learned that it was in the wrong place.


Observations from NASA's Spitzer Space Telescope reveal a distant planet with a warm spot in the wrong place.

The gas-giant planet, named upsilon Andromedae b, orbits tightly around its star, with one face perpetually boiling under the star's heat. It belongs to a class of planets termed hot Jupiters, so called for their scorching temperatures and large, gaseous constitutions.

One might think the hottest part of these planets would be directly under the sun-facing side, but previous observations have shown that their hot spots may be shifted slightly away from this point. Astronomers thought that fierce winds might be pushing hot, gaseous material around.

But the new finding may throw this theory into question. Using Spitzer, an infrared observatory, astronomers found that upsilon Andromedae b's hot spot is offset by a whopping 80 degrees. Basically, the hot spot is over to the side of the planet instead of directly under the glare of the sun.

'We really didn't expect to find a hot spot with such a large offset,' said Ian Crossfield, lead author of a new paper about the discovery appearing in an upcoming issue of Astrophysical Journal. 'It's clear that we understand even less about the atmospheric energetics of hot Jupiters than we thought we did.'

The results are part of a growing field of exoplanet atmospheric science, pioneered by Spitzer in 2005, when it became the first telescope to directly detect photons from an exoplanet, or a planet orbiting a star other than our sun. Since then, Spitzer, along with NASA's Hubble Space Telescope, has studied the atmospheres of several hot Jupiters, finding water, methane, carbon dioxide and carbon monoxide.

In the new study, astronomers report observations of upsilon Andromedae b taken across five days in February of 2009. This planet whips around its star every 4.6 days, as measured using the 'wobble,' or radial velocity technique, with telescopes on the ground. It does not transit, or cross in front of, its star as many other hot Jupiters studied by Spitzer do.

They've guessed at some possibilities, including supersonic winds triggering shock waves that heat material up, and star-planet magnetic interactions. But these are just speculation. As more hot Jupiters are examined, astronomers will test new theories.

'This is a very unexpected result,' said Michael Werner, the Spitzer project scientist at NASA's Jet Propulsion Laboratory, Pasadena, Calif., who was not a part of the study. 'Spitzer is showing us that we are a long way from understanding these alien worlds.'

The Spitzer observations were made before it ran out of its liquid coolant in May 2009, officially beginning its warm mission.