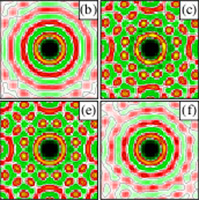 Density distribution of the quantum particles (excitons) in the plane of the quantum well. Yellow color corresponds to high density, red to lower, green to zero. From top left to bottom right the density is increased at constant temperature.

Nature knows two opposite types of solids: one that emerges upon compression from a liquid and a second that appears if the pressure on a liquid is reduced. While the former is typical for substances in our everyday life the latter occurs for example in a dense quantum liquid of electrons (such as in metals) or ions (in exotic white dwarf or neutron stars). Now it has been shown that there exists yet a third form of matter that inherits both of these properties. This unusual behaviour has been predicted to exist in crystals of excitons – hydrogen atom-like bound states of electrons and holes – in a semiconductor quantum well placed in a strong electric field.

A team from Kiel University (Germany) consisting of Dr. Jens Bönning, Privatdozent Alexei Filinov and Prof. Michael Bonitz has performed extensive accurate computer simulations that shed light on the mysterious properties of this material. The results appear in the current issue of Physical Review B. There the authors present a simple explanation for the coexistence of the two seemingly contradicting melting behaviours. The secret lies in the character of the forces acting between two excitons: at low pressure excitons repel each other via a dipole force and form a quantum liquid. Upon compression this fluid freezes into an exciton crystal. Further compression brings two excitons so close together that the quantum wave nature of their constituents (electrons and holes) starts to weaken the forces. As a consequence, further compression leads to an increasing overlap of the exciton quantum waves that is no longer balanced by the inter-exciton repulsion, and the crystal melts again. The researchers have made precise predictions where to search for this exotic crystal of excitons (particularly well suited are zinc selenide or gallium arsenide quantum wells) – it is now up to the experimentalists to find this new state of matter.