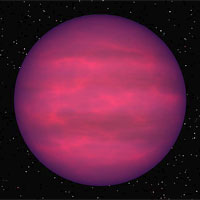 An artist's impression of a brown dwarf star.

Astronomers have detected what may be the most-rapidly-rotating, ultra-cool, brown-dwarf star ever seen. The super-fast rotation period was measured by using the 305-meter Arecibo radio telescope -- the same telescope that was used to discover the first planets ever found outside our solar system.

“Our new detection of an ultra-cool dwarf emphasizes Arecibo’s amazing sensitivity, which enables measurements of the magnetic fields of very-low-mass stars, brown dwarfs, and potentially planets. Because planetary magnetic fields protect life from the harmful effects of stellar activity, it is clear that future programs of this kind using the Arecibo telescope will be crucial to our understanding of the habitability of planets around other stars,“ said Alex Wolszczan, a co-discoverer with Matthew Route of radio emission from this new brown-dwarf star.

The discovery is detailed in a recent issue of The Astrophysical Journal Letters (Volume 821, L21), coauthored by Wolszczan, Evan Pugh University Professor of Astronomy and Astrophysics at Penn State University; and Route, a Senior Scientific Applications Analyst at Purdue University and a Penn State Ph.D. graduate. The repeated radio flares that they found being emitted by the brown dwarf allowed them to measure the extremely fast rotation of this exotic object. Their record-breaking detection demonstrates that even the coolest brown dwarfs, and possibly young giant planets, can be discovered and studied using radio observations.

“Our discovery of the super-fast rotation of J1122+25 poses new challenges for the theoretical models of the rotational evolution of these objects and the internal dynamos that power their magnetic fields,” Route said. J1122+25 is the short version of the scientific name of this new brown dwarf, WISEPC J112254.73+255021.5. 'The radio flaring and rapid rotation of J1122+25 can reveal a lot about the origin and evolution of the magnetic fields of brown dwarfs, and how this knowledge can be applied to young giant planets,' Route said.

The data collected so far from this brown dwarf show that it could be rotating every 17, 34, or 51 minutes -- an ambiguity that requires the collection of more data to identify which of the three measurements is this star's rotational period. But, the scientists report, even the longest of these rotation periods would mean this brown dwarf rotates much faster than any measured so far.

The brown dwarf was first discovered by the Wide-field Infrared Survey Explorer (WISE) in 2011. Route and Wolszczan subsequently observed J1122+25 at five epochs spread over an eight-month period as part of an ongoing search for brown dwarfs with sudden outbursts of energy at radio wavelengths -- called flaring ratio emission. 'J1122+25 is about 55 light years away and is only one of six coolest brown dwarfs for which radio flares have been detected,' Route said.

Brown dwarfs like J1122+25 are sometimes called “failed stars” because they did not accumulate enough material when they formed in order to fuse hydrogen into helium, the process that enables stars to shine. The lack of continuous energy production from fusion makes brown dwarfs much colder and dimmer than most stars and gives them much different chemistry. For some of them, internal structure in connection with rapid rotation can generate strong magnetic fields and the dramatic radio flares that have been detected by the Arecibo telescope.

Many astronomers treat brown dwarfs as the 'missing link' between stars and planets. Brown dwarfs share many physical traits with gas-giant planets like Jupiter. Studies of ultra-cool brown dwarfs like J1122+25 can be used to infer the properties of giant planets, which are much harder than stars to study in detail. J1122+25 is about one-sixth the temperature of the Sun, and emits light primarily in infrared wavelengths.

This discovery was supported by the Center for Exoplanets and Habitable Worlds, which is part of Penn State and its Eberly College of Science, and by the Arecibo Observatory, which is operated by SRI International in alliance with Ana G. Méndez-Universidad Metropolitana and the Universities Space Research Association, under a cooperative agreement with the National Science Foundation (AST-1100968).

News Story Origin and Copyright: PSU
Click here for the original news release.
'The mathematician's patterns, like the painter's or the poets, must be beautiful; the ideas, like the colours or the words, must fit together in a harmonious way. Beauty is the first test: there is no permanent place in the world for ugly mathematics.'