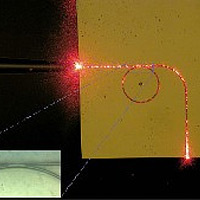 It looks like a piece of gel that slips into the sole of your sneaker, but it's a new nano-based technology that can make computers and the Internet hundreds of times faster — a communications technology 'enabler' that may be in use only five or ten years in the future, currently being created by Dr. Koby Scheuer of Tel Aviv University's School of Electrical Engineering.

Dr. Scheuer has developed a new plastic-based technology for the nano-photonics market, which manufactures optical devices and components. Reported in the journal Optics Express, his plastic-based 'filter' is made from nanometer-sized grooves embedded into the plastic. When used in fiber optics cable switches, this new device will make our communication devices smaller, more flexible and more powerful, he says.

'Once Americans have a fiber optics cable coming into every home, all communication will go through it — telephone, cable TV, the Internet. But to avoid bottlenecks of information, we need to separate the information coming through into different channels. Our polymeric devices can do that in the optical domain — at a speed, quality and cost that the semi-conductor industry can't even imagine,' Dr. Scheuer says.

Filtering the noise from the information

Every optical device used in today's communication tools has a filter. Whether it's the drive reader in your MacBook or the cable that brings cheap long-distance phone calls to your phone, each system uses filters to clean up the signal and interpret the different messages. In the next decade, fiber optic cables that now run from city to city will feed directly into every individual home. When that technology comes to light, the new plastic-based switches could revolutionize the way we communicate.

'Right now, we could transmit all of the written text of the world though a single fiber in a fiber optics cable in just a few seconds,' says Dr. Scheuer. 'But in order to handle these massive amounts of communication data, we need filters to make sense of the incoming information. Ours uses a plastic-based switch, replacing hard-to-fabricate and expensive semi-conductors.'

Semi-conductors, grown on crystals in sterile labs and processed in special ovens, take days and sometimes months to manufacture. They are delicate and inflexible as well, Dr. Scheuer explains. 'Our plastic polymer switches come in an easy-to-work-with liquid solution. Using a method called 'stamping,' almost any laboratory can make optical devices out of the silicon rubber mold we've developed.'

The silicon rubber mold is scored with nano-sized grooves, invisible to the eye and each less than a millionth of a meter in width. A plastic solution can be poured over the mold to replicate the optical switch in minutes. When in place in a fiber-optic network, the grooves on the switch modulate light coming in through the cables, and the data is filtered and encoded into usable information.

One word of advice: 'Plastics'

His biggest hurdle, says Dr. Scheuer, is in convincing the communications industry that polymers are stable materials.

'There is a lot of prejudice in this industry against plastics. But this approach could take us to a new level of communication,' the researcher says. He also notes that the process is not much different from the way that mass numbers of DVDs are produced in a factory — except Dr. Scheuer works on a nano, not a 'giant' micro, scale.

His device can also be used in the gyros of planes, ships and rockets; inserted into cell phones; and made a part of flexible virtual reality gloves so doctors could 'operate' on computer networks over large distances.