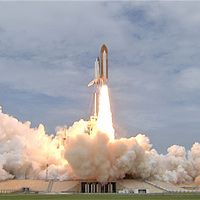 'What a truly awesome day today,' said NASA Associate Administrator for Space Operations Bill Gerstenmaier at the STS-135 postlaunch news conference. 'I'm really talking about the teams and the people who supported the launch that just occurred. What you saw is the finest launch team and shuttle preparation teams in the world.'

'It truly was an awesome, spectacular launch,' added Kennedy Space Center Director Bob Cabana, who looked ahead to plans for future development beyond the shuttle program as space station operations continue.

'We're really looking forward to a great mission. This is a very critical mission for station resupply. We're going to do our best to try and stretch out an extra day,' said Space Shuttle Program Launch Integration Manager and chairman of the pre-mission Mission Management Team Mike Moses. 'I think the shuttle program is ending exactly as it should. We've built the International Space Station, we're stocking it up for the future, and ready to hand it off, and we finish really, really strong.'

'On behalf of the launch team, and all the thousands of people here at KSC, we're just very, very proud that we finished strong from the launch perspective,' added Shuttle Launch Director Mike Leinbach.

Atlantis and its four astronauts lifted off from Launch Pad 39A at NASA's Kennedy Space Center in Florida at 11:29 a.m. EDT. Atlantis will dock with the space station on Sunday.