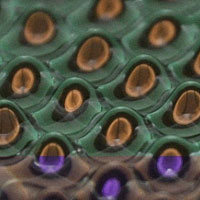 Vibrating a tray of silicone oil causes so-called Faraday waves to form in the oil's surface. Recent experiments in which fluid droplets reproduce the behavior of subatomic particles require holding the intensity of the vibrations just below the Faraday-wave threshold.

In the first decades of the 20th century, physicists hotly debated how to make sense of the strange phenomena of quantum mechanics, such as the tendency of subatomic particles to behave like both particles and waves. One early theory, called pilot-wave theory, proposed that moving particles are borne along on some type of quantum wave, like driftwood on the tide. But this theory ultimately gave way to the so-called Copenhagen interpretation, which gets rid of the carrier wave, but with it the intuitive notion that a moving particle follows a definite path through space.

Recently, Yves Couder, a physicist at Université Paris Diderot, has conducted a series of experiments in which millimeter-scale fluid droplets, bouncing up and down on a vibrated fluid bath, are guided by the waves that they themselves produce. In many respects, the droplets behave like quantum particles, and in a recent commentary in the Proceedings of the National Academy of Sciences, John Bush, an applied mathematician at MIT who specializes in fluid dynamics, suggests that experiments like Couder’s may ultimately shed light on some of the peculiarities of quantum mechanics.

The wave-particle duality is best illustrated by a canonical experiment in quantum mechanics that’s generally referred to as the two-slit, or two-hole, experiment. As the theoretical physicist Richard Feynman ’39 once put it, “Any other situation in quantum mechanics, it turns out, can always be explained by saying, ‘You remember the case of the experiment with the two holes? It’s the same thing.’”

Suppose you have a tray of water, and across the middle of the tray is a barrier with two openings in it. At one end of the tray is a vibrating rod, and at the other is a pressure sensor. The rod’s vibration sends waves across the surface of the water, and when they pass through the openings in the barrier, two new waves form on the opposite side.

On their way to the pressure sensor, these waves run into each other. Where a wave crest meets another crest, they combine to produce a bigger crest. But where a crest and a trough meet, they cancel each other out. The pressure sensor thus registers an “interference pattern” — stripes of various size that represent strong crests, with gaps between them where waves canceled each other out.

So what happens when you shoot light at a detector, through a barrier with two holes in it? Again, you get an interference pattern: light appears to behave like a wave. But light also comes in particles, or photons, which can be fired at the detector one at a time. What happens then?

As the first few photons strike the detector, they leave a seemingly random scattering of dots, like the bullet holes left in a target by a mediocre marksman. But over time, the dots form a pattern — the same interference pattern produced by a beam of light. How is that possible, given that the photons were fired one at a time?

Pilot-wave theory proposes that the photons ride on the back of some type of mystery waves, which interact with each other no matter the number of photons that pass through the holes. That interaction is what guides the photons to the detector. When the Austrian physicist Erwin Schrödinger proposed his famous wave equation, which remains the fundamental equation of quantum physics, he was actually describing the guiding wave.

Since the Copenhagen interpretation dispenses with the guiding wave, however, it interprets Schrödinger’s equation as instead describing the probability that the photon will be found at a given location. Moreover, until the photon strikes the detector, it’s in a sort of metaphysical limbo, with no definite location. As it passes through the holes, it can thus interfere with itself, which explains the interference pattern at the detector.

In formulating his wave equation, Schrödinger was inspired by the theories of Louis de Broglie, who originated pilot-wave theory and whose work on wave-particle duality earned him the 1929 Nobel Prize in Physics. Pilot-wave theory was revived in the 1950s by the physicist David Bohm and still has some proponents, but for the most part, it has faded from view.

In Couder’s system — which Bush plans to explore further at MIT — a fluid-filled tray is placed on a vibrating surface. The intensity of the vibrations is held just below the threshold at which it would cause waves — so-called Faraday waves — on the surface of the fluid. When a droplet of the same fluid is placed on the surface, a cushion of air between the drop and the bath prevents the drop from coalescing. The droplet can thus bounce on the surface. The bouncing causes waves, and those waves, in turn, propel the droplet along the surface. Couder and his co-authors call these moving droplets “walkers.”

“One of their first experiments involved sending walkers towards a slit,” Bush says. “As they pass through the slit, they appear to be randomly deflected, but if you do it many times, diffraction patterns emerge.” That is, the droplets strike the far wall of the tray in patterns that reproduce the interference patterns of waves. “Their system is a macroscopic version of the classic single-photon diffraction experiments,” Bush says.

Wave-borne fluid droplets mimic other quantum phenomena as well, Bush says. One of these is quantum tunneling, subatomic particles’ apparent ability to pass through barriers. A walking droplet approaching a barrier across the tray will usually bounce off it, like a hockey puck off the wall. But occasionally, the droplet will take enough energy from the wave that it hops right over the barrier.

In a paper published in the same issue of PNAS, which is the subject of Bush’s commentary, Couder’s group reports its most startling discovery. If the vibrating fluid bath is also rotating, a walking droplet will lock into an orbit determined by the troughs of its wave. The notion that a subatomic particle has only a few allowed orbital states is called “quantization,” the very phenomenon that gives quantum mechanics its name.

In the early 1800s, the English scientist Thomas Young conducted experiments with ripple tanks to convince the scientific community that light was a wave. “With Couder’s system, one can now explore aspects of wave-particle duality in a fluid system,” Bush says. “How might the development of quantum mechanics have differed had Couder’s system been known to its founding fathers?”