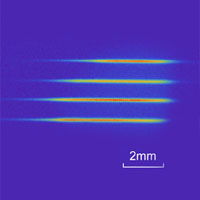 The fluorescence from the four atomic ensembles. These ensembles are the four quantum memories that store an entangled quantum state.

Researchers at the California Institute of Technology (Caltech) have demonstrated quantum entanglement for a quantum state stored in four spatially distinct atomic memories.

Their work, described in the November 18 issue of the journal Nature, also demonstrated a quantum interface between the atomic memories—which represent something akin to a computer 'hard drive' for entanglement—and four beams of light, thereby enabling the four-fold entanglement to be distributed by photons across quantum networks. The research represents an important achievement in quantum information science by extending the coherent control of entanglement from two to multiple (four) spatially separated physical systems of matter and light.

The proof-of-principle experiment, led by William L. Valentine Professor and professor of physics H. Jeff Kimble, helps to pave the way toward quantum networks. Similar to the Internet in our daily life, a quantum network is a quantum 'web' composed of many interconnected quantum nodes, each of which is capable of rudimentary quantum logic operations (similar to the 'AND' and 'OR' gates in computers) utilizing 'quantum transistors' and of storing the resulting quantum states in quantum memories. The quantum nodes are 'wired' together by quantum channels that carry, for example, beams of photons to deliver quantum information from node to node. Such an interconnected quantum system could function as a quantum computer, or, as proposed by the late Caltech physicist Richard Feynman in the 1980s, as a 'quantum simulator' for studying complex problems in physics.

Quantum entanglement is a quintessential feature of the quantum realm and involves correlations among components of the overall physical system that cannot be described by classical physics. Strangely, for an entangled quantum system, there exists no objective physical reality for the system's properties. Instead, an entangled system contains simultaneously multiple possibilities for its properties. Such an entangled system has been created and stored by the Caltech researchers.

Previously, Kimble's group entangled a pair of atomic quantum memories and coherently transferred the entangled photons into and out of the quantum memories (http://media.caltech.edu/press_releases/13115). For such two-component—or bipartite—entanglement, the subsystems are either entangled or not. But for multi-component entanglement with more than two subsystems—or multipartite entanglement—there are many possible ways to entangle the subsystems. For example, with four subsystems, all of the possible pair combinations could be bipartite entangled but not be entangled over all four components; alternatively, they could share a 'global' quadripartite (four-part) entanglement.

Hence, multipartite entanglement is accompanied by increased complexity in the system. While this makes the creation and characterization of these quantum states substantially more difficult, it also makes the entangled states more valuable for tasks in quantum information science.

To achieve multipartite entanglement, the Caltech team used lasers to cool four collections (or ensembles) of about one million Cesium atoms, separated by 1 millimeter and trapped in a magnetic field, to within a few hundred millionths of a degree above absolute zero. Each ensemble can have atoms with internal spins that are 'up' or 'down' (analogous to spinning tops) and that are collectively described by a 'spin wave' for the respective ensemble. It is these spin waves that the Caltech researchers succeeded in entangling among the four atomic ensembles.

In the current experiment, entanglement was 'stored' in the four atomic ensembles for a variable time, and then 'read out'—essentially, transferred—to four beams of light. To do this, the researchers shot four 'read' lasers into the four, now-entangled, ensembles. The coherent arrangement of excitation amplitudes for the atoms in the ensembles, described by spin waves, enhances the matter–light interaction through a phenomenon known as superradiant emission.

'The emitted light from each atom in an ensemble constructively interferes with the light from other atoms in the forward direction, allowing us to transfer the spin wave excitations of the ensembles to single photons,' says Akihisa Goban, a Caltech graduate student and coauthor of the paper. The researchers were therefore able to coherently move the quantum information from the individual sets of multipartite entangled atoms to four entangled beams of light, forming the bridge between matter and light that is necessary for quantum networks.

The Caltech team investigated the dynamics by which the multipartite entanglement decayed while stored in the atomic memories. 'In the zoology of entangled states, our experiment illustrates how multipartite entangled spin waves can evolve into various subsets of the entangled systems over time, and sheds light on the intricacy and fragility of quantum entanglement in open quantum systems,' says Caltech graduate student Kyung Soo Choi, the lead author of the Nature paper. The researchers suggest that the theoretical tools developed for their studies of the dynamics of entanglement decay could be applied for studying the entangled spin waves in quantum magnets.

Further possibilities of their experiment include the expansion of multipartite entanglement across quantum networks and quantum metrology. 'Our work introduces new sets of experimental capabilities to generate, store, and transfer multipartite entanglement from matter to light in quantum networks,' Choi explains. 'It signifies the ever-increasing degree of exquisite quantum control to study and manipulate entangled states of matter and light.'

In addition to Kimble, Choi, and Goban, the other authors of the paper, 'Entanglement of spin waves among four quantum memories,' are Scott Papp, a former postdoctoral scholar in the Caltech Center for the Physics of Information now at the National Institute of Standards and Technology in Boulder, Colorado, and Steven van Enk, a theoretical collaborator and professor of physics at the University of Oregon, and an associate of the Institute for Quantum Information at Caltech.

This research was funded by the National Science Foundation, the National Security Science and Engineering Faculty Fellowship program at the U.S. Department of Defense (DOD), the Northrop Grumman Corporation, and the Intelligence Advanced Research Projects Activity.