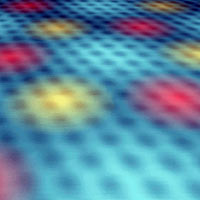 Researchers have taken one more step toward understanding the unique and often unexpected properties of graphene, a two-dimensional carbon material that has attracted interest because of its potential applications in future generations of electronic devices.

In the Aug. 8 advance online edition of the journal Nature Physics, researchers from the Georgia Institute of Technology and the National Institute of Standards and Technology (NIST) describe for the first time how the orbits of electrons are distributed spatially by magnetic fields applied to layers of epitaxial graphene.

The research team also found that these electron orbits can interact with the substrate on which the graphene is grown, creating energy gaps that affect how electron waves move through the multilayer material. These energy gaps could have implications for the designers of certain graphene-based electronic devices.

“The regular pattern of energy gaps in the graphene surface creates regions where electron transport is not allowed,” said Phillip N. First, a professor in the Georgia Tech School of Physics and one of the paper’s co-authors. “Electron waves would have to go around these regions, requiring new patterns of electron wave interference. Understanding such interference will be important for bi-layer graphene devices that have been proposed, and may be important for other lattice-matched substrates used to support graphene and graphene devices.”

In a magnetic field, an electron moves in a circular trajectory – known as a cyclotron orbit – whose radius depends on the size of the magnetic field and the energy of electron. For a constant magnetic field, that’s a little like rolling a marble around in a large bowl, First said.

“At high energy, the marble orbits high in the bowl, while for lower energies, the orbit size is smaller and lower in the bowl,” he explained. “The cyclotron orbits in graphene also depend on the electron energy and the local electron potential – corresponding to the bowl – but until now, the orbits hadn’t been imaged directly.”

Placed in a magnetic field, these orbits normally drift along lines of nearly constant electric potential. But when a graphene sample has small fluctuations in the potential, these “drift states” can become trapped at a hill or valley in the material that has closed constant potential contours. Such trapping of charge carriers is important for the quantum Hall effect, in which precisely quantized resistance results from charge conduction solely through the orbits that skip along the edges of the material.

The study focused on one particular electron orbit: a zero-energy orbit that is unique to graphene. Because electrons are matter waves, interference within a material affects how their energy relates to the velocity of the wave – and reflected waves added to an incoming wave can combine to produce a slower composite wave. Electrons moving through the unique “chicken-wire” arrangement of carbon-carbon bonds in the graphene interfere in a way that leaves the wave velocity the same for all energy levels.

In addition to finding that energy states follow contours of constant electric potential, the researchers discovered specific areas on the graphene surface where the orbital energy of the electrons changes from one atom to the next. That creates an energy gap within isolated patches on the surface.

“By examining their distribution over the surface for different magnetic fields, we determined that the energy gap is due to a subtle interaction with the substrate, which consists of multilayer graphene grown on a silicon carbide wafer,” First explained.

In multilayer epitaxial graphene, each layer’s symmetrical sublattice is rotated slightly with respect to the next. In prior studies, researchers found that the rotations served to decouple the electronic properties of each graphene layer.

“Our findings hold the first indications of a small position-dependent interaction between the layers,” said David L. Miller, the paper’s first author and a graduate student in First’s laboratory. “This interaction occurs only when the size of a cyclotron orbit – which shrinks as the magnetic field is increased – becomes smaller than the size of the observed patches.”

The origin of the position dependent interaction is believed to be the “moiré pattern” of atomic alignments between two adjacent layers of graphene. In some regions, atoms of one layer lie atop atoms of the layer below, while in other regions, none of the atoms align with the atoms in the layer below. In still other regions, half of the atoms have neighbors in the underlayer, an instance in which the symmetry of the carbon atoms is broken and the Landau level – discrete energy level of the electrons – splits into two different energies.

Experimentally, the researchers examined a sample of epitaxial graphene grown at Georgia Tech in the laboratory of Professor Walt de Heer, using techniques developed by his research team over the past several years.

They used the tip of a custom-built scanning-tunneling microscope (STM) to probe the atomic-scale electronic structure of the graphene in a technique known as scanning tunneling spectroscopy. The tip was moved across the surface of a 100-square nanometer section of graphene, and spectroscopic data was acquired every 0.4 nanometers.

The measurements were done at 4.3 degrees Kelvin to take advantage of the fact that energy resolution is proportional to the temperature. The scanning-tunneling microscope, designed and built by Joseph Stroscio at NIST’s Center for Nanoscale Science and Technology, used a superconducting magnet to provide the magnetic fields needed to study the orbits.

According to First, the study raises a number of questions for future research, including how the energy gaps will affect electron transport properties, how the observed effects may impact proposed bi-layer graphene coherent devices – and whether the new phenomenon can be controlled.

“This study is really a stepping stone in long path to understanding the subtleties of graphene’s interesting properties,” he said. “This material is different from anything we have worked with before in electronics.”