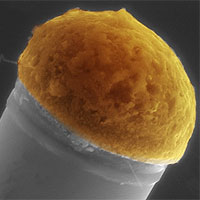 Molten droplets of copper, at top, dissolve silicon out of a surrounding silicon-rich gas, and then the silicon precipitates out at the bottom of the drop to gradually build up a silicon microwire. This microscope image has had color added for clarity.

Microwires made of silicon — tiny wires with a thickness comparable to a human hair — have a wide range of possible uses, including the production of solar cells that can harvest much more sunlight for a given amount of material than a conventional solar cell made from a thin wafer of silicon crystal. Now researchers from MIT and Penn State have found a way of producing such wires in quantity in a highly controlled way that could be scaled up to an industrial-scale process, potentially leading to practical commercial applications.

Other ways of making such wires are already known, and prototypes of solar cells made from them have been produced by several researchers. But these methods have serious limitations, says Tonio Buonassisi, MIT professor of mechanical engineering and a co-author of a paper on the new work that was recently published online in the journal Small, and will soon appear in the print edition. Most require several extra manufacturing steps, provide little control over the exact sizes and spacing of the wires, and only work on flat surfaces. By contrast, the new process is simple yet allows precise control over the wire dimensions and spacing, and could theoretically be done on any kind of curved, 3-D surface.

Microwires are thought to be capable of reaching efficiencies close to those of conventional solar cells in converting sunlight to electricity, but because the wires are so tiny they would do so using only a small fraction of the amount of expensive silicon needed for the conventional cells, thus potentially achieving major reductions in cost.

In addition to microwires’ potential use in solar cells, other researchers have proposed ways such microscopic wires could be used to build new kinds of transistors and integrated circuits, as well as electrodes for advanced batteries and certain kinds of environmental monitoring devices. For any of these ideas to be practical, however, there must be an efficient, scalable manufacturing method.

The new method involves heating and intentionally contaminating the surface of a silicon wafer with copper, which diffuses into the silicon. Then, when the silicon slowly cools, the copper diffuses out to form droplets on the surface. Then, when it is placed in an atmosphere of silicon tetrachloride gas, silicon microwires begin to grow outward wherever there is a copper droplet on the surface. Silicon in the gas dissolves into these copper droplets, and then after reaching a sufficient concentration begins to precipitate out at the bottom of the droplet, onto the silicon surface below. This buildup of silicon gradually elongates to form microwires each only about 10 to 20 micrometers (millionths of a meter) across, growing up from the surface. The whole process can be carried out repeatedly on an industrial manufacturing scale, Buonassisi says, or even could potentially be adapted to a continuous process.

The work done so far is just a proof of principle, he says, and more work remains to be done to find the best combinations of temperature profiles, copper concentrations and surface patterning for various applications, since the process allows for orders-of-magnitude differences in the size of the wires. For example, it remains to be determined what thickness and spacing of wires produces the most efficient solar cells. But this work demonstrates a potential for a kind of solar cell based on such wires that could significantly lower costs, both by allowing the use of lower grades of silicon (that is, less-highly refined), since the process of wire growth helps to purify the material, and by using much smaller amounts of it, since the tiny wires are made up of just a tiny fraction of the amount needed for conventional silicon crystal wafers. “This is still in a very early stage,” Buonassisi says, because in deciding on a configuration for such a solar cell “there are so many things to optimize.”

Michael Kelzenberg, a postdoctoral scholar at the California Institute of Technology who has spent the last five years doing research on silicon microwires, says that while others have used the copper-droplet technique for growing microwires, “What's really new here is the method of producing those liquid metal droplets.” While others have had to place the droplets of molten copper on the silicon plate, requiring extra processing steps, “Buonassisi and his colleagues have shown that metal can be diffused into the growth substrate beforehand, and through careful heating and cooling, the metal droplets will actually form on their own — with the correct position and size.”

Kelzenberg adds that his research group has recently demonstrated that silicon microwire solar cells can equal the efficiency of today’s typical commercial solar cells. “I think the greatest challenge remaining is to show that this technique is more cost-effective or otherwise beneficial than other catalyst metal production methods,” he says. But overall, he says, some version of silicon microwire technology “has the potential to enable dramatic cost reductions” of solar panels.

The paper was co-authored by Vidya Ganapati ’10, doctoral student David Fenning, postdoctoral fellow Mariana Bertoni, and research specialist Alexandria Fecych, all in MIT’s Department of Mechanical Engineering, and postdoctoral researcher Chito Kendrick and Professor Joan Redwing of Pennsylvania State University. The work was supported by the U.S. Department of Energy, the Chesonis Family Foundation and the National Science Foundation.