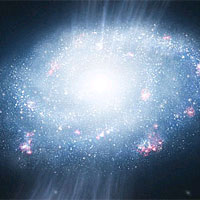 New observations from ESO’s Very Large Telescope have, for the first time, provided direct evidence that young galaxies can grow by sucking in the cool gas around them and using it as fuel for the formation of many new stars. In the first few billion years after the Big Bang the mass of a typical galaxy increased dramatically and understanding why this happened is one of the hottest problems in modern astrophysics. The results appear in the 14 October issue of the journal Nature.

The first galaxies formed well before the Universe was one billion years old and were much smaller than the giant systems — including the Milky Way — that we see today. So somehow the average galaxy size has increased as the Universe has evolved. Galaxies often collide and then merge to form larger systems and this process is certainly an important growth mechanism. However, an additional, gentler way has been proposed.

A European team of astronomers has used ESO’s Very Large Telescope to test this very different idea — that young galaxies can also grow by sucking in cool streams of the hydrogen and helium gas that filled the early Universe and forming new stars from this primitive material. Just as a commercial company can expand either by merging with other companies, or by hiring more staff, young galaxies could perhaps also grow in two different ways — by merging with other galaxies or by accreting material.

The team leader, Giovanni Cresci (Osservatorio Astrofisico di Arcetri) says: “The new results from the VLT are the first direct evidence that the accretion of pristine gas really happened and was enough to fuel vigorous star formation and the growth of massive galaxies in the young Universe.” The discovery will have a major impact on our understanding of the evolution of the Universe from the Big Bang to the present day. Theories of galaxy formation and evolution may have to be re-written.

The group began by selecting three very distant galaxies to see if they could find evidence of the flow of pristine gas from the surrounding space and the associated formation of new stars. They were very careful to make sure that their specimen galaxies had not been disturbed by interactions with other galaxies. The selected galaxies were very regular, smoothly rotating discs, similar to the Milky Way, and they were seen about two billion years after the Big Bang (at a redshift of around three).

In galaxies in the modern Universe the heavy elements [1] are more abundant close to the centre. But when Cresci’s team mapped their selected distant galaxies with the SINFONI spectrograph on the VLT [2] they were excited to see that in all three cases there was a patch of the galaxy, close to the centre, with fewer heavy elements, but hosting vigorously forming stars, suggesting that the material to fuel the star formation was coming from the surrounding pristine gas that is low in heavy elements. This was the smoking gun that provided the best evidence yet of young galaxies accreting primitive gas and using it to form new generations of stars.

As Cresci concludes: “This study has only been possible because of the outstanding performance of the SINFONI instrument on the VLT. It has opened a new window for studying the chemical properties of very distant galaxies. SINFONI provides information not only in two spatial dimensions, but also in a third, spectral dimension, which allows us to see the internal motions inside galaxies and study the chemical composition of the interstellar gas.”
Notes

[1] The gas filling the early Universe was almost all hydrogen and helium. The first generations of stars processed this primitive material to create heavier elements such as oxygen, nitrogen and carbon by nuclear fusion. When this material was subsequently spewed back into space by intense particle winds from massive young stars and supernova explosions the amounts of heavy elements in the galaxy gradually increased. Astronomers refer to elements other than hydrogen and helium as “heavy elements”.

[2] By carefully splitting up the faint light coming from a galaxy into its component colours using powerful telescopes and spectrographs, astronomers can identify the fingerprints of different chemicals in remote galaxies, and measure the amounts of heavy elements present. With the SINFONI instrument on the VLT astronomers can go one better and get a separate spectrum for each part of an object. This allows them to make a map that shows the quantity of heavy elements present in different parts of a galaxy and also determine where in the galaxy star formation is occurring most vigorously.
More information

This research was presented in a paper, Gas accretion in distant galaxies as the origin of chemical abundance gradients, by Cresci et al., to appear in Nature on 14 October 2010.