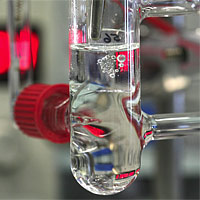 Producing hydrogen in a sustainable way is a challenge and production cost is too high. A team led by EPFL Professor Xile Hu has discovered that a molybdenum based catalyst allows hydrogen production at room temperature, and is inexpensive and efficient. An international patent based on this discovery has just been filled.

Existing in large quantities on Earth, water is composed of hydrogen and oxygen. It can be broken down by applying an electrical current; this is the process known as electrolysis. To improve this particularly slow reaction, platinum is generally used as a catalyst. However, platinum is a particularly expensive material that has tripled in price over the last decade. Now EPFL scientists have shown that amorphous molybdenum sulphides, found abundantly, are efficient catalysts and hydrogen production cost can be significantly lowered.

The new catalysts exhibit many advantageous technical characteristics. They are stable and compatible with acidic, neutral or basic conditions in water. Also, the rate of the hydrogen production is faster than other catalysts of the same price. The discovery opens up some interesting possibilities for industrial applications such as in the area of solar energy storage.

It’s only by chance that Daniel Merki, Stéphane Fierro, Heron Vrubel and Xile Hu made this discovery during an electrochemical experience. “It’s a perfect illustration of the famous serendipity principle in fundamental research”, as Xile Hu emphasizes: “Thanks to this unexpected result, we’ve revealed a unique phenomenon”, he explains. “But we don’t yet know exactly why the catalysts are so efficient.”

The next stage is to create a prototype that can help to improve sunlight-driven hydrogen production. But a better understanding of the observed phenomenon is also required in order to optimize the catalysts.