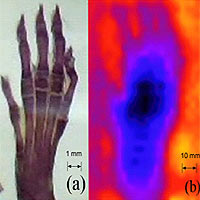 The neutron micrograph at right (b) of a rat's foot uses false color to show differences in the number of neutrons penetrating the sample and hitting a detector. Black areas represent areas with the fewest neutrons; red areas have the most. With future improvements in resolution, such microscopes may provide details about internal structures.

A prototype microscope that uses neutrons instead of light to “see” magnified images has been demonstrated at the National Institute of Standards and Technology (NIST). Neutron microscopes might eventually offer certain advantages over optical, X-ray and electron imaging techniques such as better contrast for biological samples.

Described in the July 19 issue of Applied Physics Letters,* the imaging process involves hitting a sample with an intense neutron beam. The neutrons that pass through—whose pattern reflects the sample’s internal structure—are directed into a row of 100 dimpled aluminum plates. Each dimpled plate acts like a weak focusing lens for neutrons, diverting the neutrons’ path slightly at each interface. The image then is projected onto a detector. Adelphi Technology Inc. of San Carlos, Calif., designed and demonstrated the microscope with the help of NIST scientists, who routinely use multiple lenses to focus neutron beams for other research.

In principle, neutrons could provide better image resolution than visible light because they have shorter wavelengths—as short as 1 nanometer (nm) compared to 400-700 nm. In this demonstration at NIST’s Center for Neutron Research, the microscope produced a resolution of only 0.5 millimeters and a magnification of about 10. However, Adelphi hopes to substantially improve image resolution through research to reduce lens aberrations. The company also hopes to build a compact, laboratory-scale neutron source.

Stanford University also participated in the research, which was supported in part by the U.S. Department of Energy.