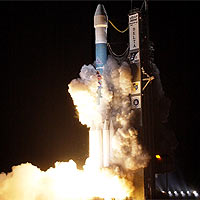 Messenger launch from a Kennedy Space Center on August 3rd, 2004.

The approximately 1.2-ton (1,100-kilogram) spacecraft, designed and built by the Johns Hopkins University Applied Physics Laboratory (APL) in Laurel, Md., was placed into a solar orbit 57 minutes after launch. Once in orbit, MESSENGER automatically deployed its two solar panels and began sending data on its status. Once the mission operations team at APL acquired the spacecraft's radio signals through tracking stations in Hawaii and California, Project Manager David G. Grant confirmed the craft was operating normally and ready for early system check-outs.

“Congratulations to the MESSENGER launch team for a spectacular start to this mission of exploration to the planet Mercury,” said Orlando Figueroa, Deputy Associate Administrator for Programs in the Science Mission Directorate at NASA Headquarters, Washington. “While we celebrate this major milestone, let's keep in mind there is still a lot to do before we reach our destination.”

“All the work that went into designing and building this spacecraft is paying off beautifully,” Grant said. “Now the team is ready to guide MESSENGER through the inner solar system and put us on target to begin orbiting Mercury in 2011.”

During a 4.9-billion mile (7.9-billion kilometer) journey that includes 15 trips around the sun, MESSENGER will fly past Earth once, Venus twice and Mercury three times before easing into orbit around its target planet. The Earth flyby, in August 2005, and the Venus flybys, in October 2006 and June 2007, will use the pull of the planets' gravity to guide MESSENGER toward Mercury's orbit. The Mercury flybys in January 2008, October 2008 and September 2009 help MESSENGER match the planet's speed and location for an orbit insertion maneuver in March 2011. The flybys also allow the spacecraft to gather data critical to planning a yearlong orbit phase.

Since MESSENGER is only the second spacecraft sent to Mercury – Mariner 10 flew past it three times in 1974-75 and gathered detailed data on less than half the surface – the mission has an ambitious science plan. With a package of seven science instruments MESSENGER will determine Mercury's composition; image its surface globally and in color; map its magnetic field and measure the properties of its core; explore the mysterious polar deposits to learn whether ice lurks in permanently shadowed regions; and characterize Mercury's tenuous atmosphere and Earth-like magnetosphere.

“It took technology more than 30 years, from Mariner 10 to MESSENGER, to bring us to the brink of discovering what Mercury is all about,” said Dr. Sean C. Solomon, MESSENGER's principal investigator from the Carnegie Institution of Washington, who leads a science team of investigators from 13 institutions across the U.S. “By the time this mission is done we will see Mercury as a much different planet than we think of it today.”

MESSENGER, short for MErcury Surface, Space ENvironment, Geochemistry, and Ranging, is the seventh mission in NASA's Discovery Program of lower cost, scientifically focused exploration projects. APL manages the mission for NASA's Office of Space Science, built the spacecraft and will operate MESSENGER during flight. MESSENGER is the 61 st spacecraft built at APL.

“With MESSENGER on its way to Mercury, the reality is sinking in that in a few years, we will see things that no human has ever seen and know infinitely more about the formation of the solar system than we know today,” said Dr. Michael D. Griffin, head of the APL Space Department.

For photos of the launch or more information about the MESSENGER mission, visit http://messenger.jhuapl.edu or www.ksc.nasa.gov.