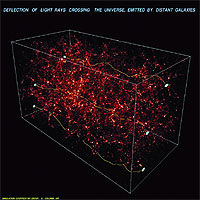 Numerical simulation showing distribution of dark matter in the universe. The box is one billion light years in length. (Credit: Max Planck Institute for Astrophysics)

A string of recent discoveries in astronomy has left scientists with an unsettling realization: The stuff we know and understand makes up less than 5 percent of the universe. The rest has to be yet-unknown forms of "dark matter" and "dark energy."

At a time of momentous changes in our basic understanding of the universe, a new document outlines the essential role of particle physics in deciphering the laws of nature that govern dark matter, dark energy and more.

Conceived to make the science as accessible as possible, the Quantum Universe report focuses on nine fundamental questions (see sidebar) in response to a request by two major research funding agencies, the U.S. Department of Energy and the National Science Foundation.

The report was prepared by a task force chaired by Persis Drell, director of research at the Stanford Linear Accelerator Center (SLAC). The funding agencies asked their joint High Energy Physics Advisory Panel to appoint the task force and to charge it with explaining what particle physics can do, and what facilities it needs, to answer "the truly exciting scientific questions of this century."

The report details how understanding the ultimate constituents of matter and the fundamental forces of nature ties in with the cosmic picture. "Just saying, 'It's fundamental, so it's important,' is not enough," said committee member Steve Kahn, a Stanford astrophysicist and deputy director of the newly established Kavli Institute for Particle Astrophysics and Cosmology (KIPAC) at SLAC. "The agencies were asking us to tell them how all this stuff fits together."

In response, the committee singled out nine crucial questions. Their report also articulated how current and future U.S. experiments, as well as international collaborations with U.S. participation, can address those questions. That includes experiments using particle accelerators, underground laboratories and space-based missions.

An unusual feature of the document -- which went through some 24 drafts during its five months of preparation -- was the emphasis on communication. From the beginning, the committee included two science communication experts -- Neil Calder of SLAC and Judy Jackson of Fermi National Laboratory in Batavia, Ill.

"It was so important to us that Quantum Universe be accessible and engaging," Calder said. "The physics is so cool, we wanted people to read the report and go: 'Wow!'"

Prompted by Calder and Jackson, the committee kept in close touch with its main audience -- the funding agencies, congressional staffers and policymakers in Washington -- for feedback. "We were able to remind people throughout the process that we weren't writing for ourselves, and we weren't even primarily writing for an internal physics audience," Jackson said.

That was no easy task. Many of the issues -- such as the possible existence of extra dimensions of space -- were "by definition esoteric," as Kahn put it.

"We struggled a lot to explain the idea of symmetry," Drell said. "It is incredibly interesting and yet such an abstract concept. We rewrote that about 20 times.

Drell credited Calder and Jackson with making the document look, well, unlike most official reports, beginning with its binding. "For some of us, the first reaction was: 'What? Twenty-first--century physics in a 19th-century cover?'" Drell said, referring to its leather-logbook look. With its use of photography and graphics, Quantum Universe is pleasing to the eye and includes playful details such as a fake sticky note on the back. "We were totally unprepared for what Judy [Jackson] and Neil [Calder] did with the layout of the document," Drell said, "and how that enhanced the science in it."

Drell emphasized that all 17 members of the committee spoke for the physics community as a whole, not for their respective institutions. At the same time, she said, "The research being carried out at SLAC, especially through [the particle-collider experiment] BaBar and KIPAC, and in the Stanford Physics Department, is targeted to many of those questions. We cover just about all of them."

So far, the intended audience of Quantum Universe -- the funding agencies and all levels of Washington policymakers -- has given it a warm welcome, Jackson said. "People liked it, and that's extremely gratifying. This is the first time I have ever seen a report get this kind of response."

But was it a fun job? "It was a blast," said Drell, "the most fun committee I've ever been on."

I. Einstein's dream of unified forces

1. Are there undiscovered principles of nature: new symmetries, new physical laws?
2. How can we solve the mystery of dark energy?
3. Are there extra dimensions of space?
4. Do all forces become one?

5. Why are there so many kinds of particles?
6. What is dark matter? How can we make it in the laboratory?
7. What are neutrinos telling us?
8. How did the universe come to be?
9. What happened to the antimatter?