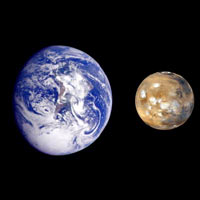 Composite image of Earth and Mars, from photographs taken by the Galileo orbiter and the Mars Global Surveyor. Image courtesy / NASA

A NASA–MIT Lincoln Laboratory team will forge the first laser communication link between Mars and Earth. This unique experiment, part of NASA's Vision for Space Exploration, will greatly benefit the transmission of data from robotic spacecraft.

In 2010, the Mars Laser Communication Demonstration (MLCD) will test the first deep-space laser communication link, which promises to transmit data at a rate nearly ten times higher than any existing interplanetary radio communication link. MLCD will fly on the Mars Telecommunications Orbiter spacecraft, which is planned for launch in 2009. The experiment is a partnership among NASA's Goddard Space Flight Center, NASA's Jet Propulsion Laboratory (JPL), and MIT’s Lincoln Laboratory (MIT/LL).

"If we are planning to put people on Mars, we'll need highly reliable communication links with high data rates, and our team wants to show how this can be done with lasers," said Rick Fitzgerald, Project Manager at NASA Goddard.

"Lincoln Lab is very excited about this program because it challenges us, and it provides an opportunity for the country to field, in-space, a very advanced system far earlier than might otherwise be possible," said Dr. Roy Bondurant, leader of the MIT/LL team.

The NASA-funded project is managed by Goddard, which also provides systems engineering management and mission assurance functions. JPL provides the principal investigator and the ground network development, with MIT/LL responsible for the flight laser communication terminal development and systems engineering. Goddard and MIT/LL each will have a co-investigator on the team.

The expected data rate varies depending on Mars's position in its orbit, the weather and atmospheric conditions on Earth, and whether reception is occurring in daytime or nighttime. When Mars is at its farthest point from Earth and the reception is occurring during daytime, the team expects to receive data at a rate of a million bits per second, but when Mars is at its closest approach and reception is at night, the rate could be thirty times higher. Today, the maximum data rate transmitted to Earth by spacecraft at Mars is about 128,000 bits per second (for NASA's Mars Odyssey spacecraft).

Lasers have not been used for deep-space communications until now because they first had to be made reliable and efficient enough for use in spacecraft millions of miles from Earth. Additionally, the radio frequencies traditionally used for deep space can pass through clouds, while laser (optical frequencies) can be partially to completely blocked by them. The project hopes to overcome this limitation by employing two separate ground terminals, on the chance that if one terminal is clouded over, the other might be clear.