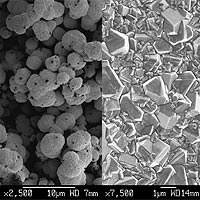 Not wanted (left): graphite on tool steel. Wanted (right): a good-adhering diamond layer on tool steel with an intermediate layer of chromium nitride. The research was funded by the Technology Foundation STW. Image courtesy of NWO.

Dutch chemist Ivan Buijnsters from the University of Nijmegen has successfully produced a diamond layer on a steel substrate. This opens up the possibility of wear-resistant tools. The secret to this technique is an adhesive layer between the steel and the diamond layer.

Buijnsters made diamond layers by allowing methane gas diluted in hydrogen gas to dissociate on a hot wire just above the substrate. The carbon atoms present in the methane dropped onto the substrate and formed a thin layer of diamond there. However, this technique did not work on a steel substrate. Graphite mostly formed on this.

The researcher discovered why a diamond layer could not be created on some types of steel. During the deposition process the carbon penetrated several micrometres into the metal, where it formed iron carbides. Subsequently, graphite formed instead of diamond. This effect was found to be less strong in stainless steel, although it was still strong enough to prevent the formation of a well-sealed diamond coating.

To solve this problem Buijnsters looked for a material that could be placed between the steel and diamond layers. The material had to adhere well to the steel and be a suitable substrate for diamond growth. Silicon was an obvious choice. However, the carbon atoms diffused through the intermediate silicon layer into the iron causing the steel to weaken.

A surface treatment of steel with boron was also found to result in a good intermediate layer, even on stainless steel. An advantage of this treatment is that the difference in expansion between diamond and steel is gradually dissipated. After the production of diamond at about 600 oC, the steel contracts much more than the diamond coating and the coating can become detached as a result of this. A treatment with boron gives the external surface of the steel an expansion coefficient more or less comparable to that of diamond. This effect gradually decreases from the surface of the steel inwards.