Back to School: Five Myths about Girls and Science 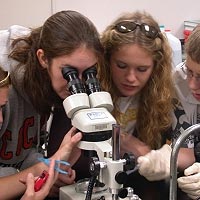 The National Science Foundation's (NSF) Research on Gender in Science and Engineering (GSE) program seeks to broaden the participation of girls and women in science, technology, engineering and mathematics (STEM) education fields by supporting research, the diffusion of research-based innovations, and extension services in education that will lead to a larger and more diverse domestic science and engineering workforce.

Though the program's name has changed over the years, it has been supporting these objectives since 1993, and its work has led to real changes in the opportunities available for girls and women to participate in the study of science, technology, engineering and math.

'We know a great deal about where the challenges and opportunities are,' says Jolene Kay Jesse, program director for GSE. 'There are helpful strategies for teachers and for families to attract girls to science and keep them engaged in it. And, by the way, these strategies are helpful in keeping students of both genders engaged.'

Following are five myths about girls and science.

1. Myth: From the time they start school, most girls are less interested in science than boys are.

Reality: In elementary school about as many girls as boys have positive attitudes toward science. A recent study of fourth graders showed that 66 percent of girls and 68 percent of boys reported liking science. But something else starts happening in elementary school. By second grade, when students (both boys and girls) are asked to draw a scientist, most portray a white male in a lab coat. The drawings generally show an isolated person with a beaker or test tube. Any woman scientist they draw looks severe and not very happy. The persistence of the stereotypes start to turn girls off, and by eighth grade, boys are twice as interested in STEM careers as girls are. The female attrition continues throughout high school, college, and even the work force. Women with STEM higher education degrees are twice as likely to leave a scientific or engineering job as men with comparable STEM degrees.

2. Myth: Classroom interventions that work to increase girls' interest in STEM run the risk of turning off the boys.

Reality: Actually, educators have found that interventions that work to increase girls' interest in STEM also increase such interest among the boys in the classroom. When girls are shown images of women scientists and given a greater sense of possibility about the person they could become, the boys get the message too--'I can do this!'

There are more opportunities than ever for girls and boys to explore science together. One resource: the discoveries, games and hands-on experiments available at http://pbskids.org/dragonflytv/.

3. Myth: Science and math teachers are no longer biased toward their male students.

Reality: In fact, biases are persistent, and teachers often interact more with boys than with girls in science and math. A teacher will often help a boy do an experiment by explaining how to do it, while when a girl asks for assistance the teacher will often simply do the experiment, leaving the girl to watch rather than do. Research shows that when teachers are deliberate about taking steps to involve the female students, everyone winds up benefiting. This may mean making sure everyone in the class is called on over the course of a particular lesson, or asking a question and waiting 10 seconds before calling on anyone. Good math and science teachers also recognize that when instruction is inquiry-based and hands-on, and students engage in problem solving as cooperative teams, both boys and girls are motivated to pursue STEM activities, education and careers.

Resisting stereotypes and furthering opportunities, Girls Creating Games was created as an after-school and summer program designed to support the interest of middle school girls in computers and information technology. Its goal is to increase the number of women and girls in the IT workforce. A sample of the girls' creations is accessible at http://programservices.etr.org/gcgweb/.

4. Myth: When girls just aren't interested in science, parents can't do much to motivate them.

Reality: Parents' support (as well as that of teachers) has been shown to be crucial to a girl's interest in science, technology, engineering and math. Making girls aware of the range of science and engineering careers available and their relevance to society works to attract more women (as well as men) to STEM careers. Parents and teachers are also in a position to tell young people what they need to do (in terms of coursework and grades) to put themselves on a path to a STEM career.

Best known as the first American woman to travel in space, Sally Ride is also a physicist, educator, and author. She is the founder of Sally Ride Science, a science content company dedicated to supporting girls' and boys' interests in science, math and technology. She offers a guide for parents, 'Science Can Take Her Places' at http://www.sallyridescience.com/.

5. Myth: At the college level, changing the STEM curriculum runs the risk of watering down important 'sink or swim' coursework.

Reality: The mentality of needing to 'weed out' weaker students in college majors--especially in the more quantitative disciplines--disproportionately weeds out women. This is not necessarily because women are failing. Rather, women often perceive 'Bs' as inadequate grades and drop out, while men with 'Cs' will persist with the class. Effective mentoring and 'bridge programs' that prepare students for challenging coursework can counteract this. Changing the curriculum often leads to better recruitment and retention of both women and men in STEM classrooms and majors. For example, having students work in pairs on programming in entry-level computer science and engineering (CSE) courses leads to greater retention of both men and women in CSE majors. In addition, given that many students (including men) have difficulty with spatial visualization and learning, coursework in this area has helped retain both women and men in engineering schools.

One of the most effective interventions to help young women choose and sustain a STEM educational path and subsequent STEM career is mentoring. MentorNet, a virtual e-mentoring network and community was established in 1997. Since then, it has expanded to offer award-winning, research-based, technology-leveraged mentoring programs that pair young people with professionals working in STEM careers in industry, government and higher education. Structured e-mail based mentoring relationships are sustained over a period of time with both one-on-one encouragement and advice, and online topic-based discussion groups. A resume database also assists job-seekers.